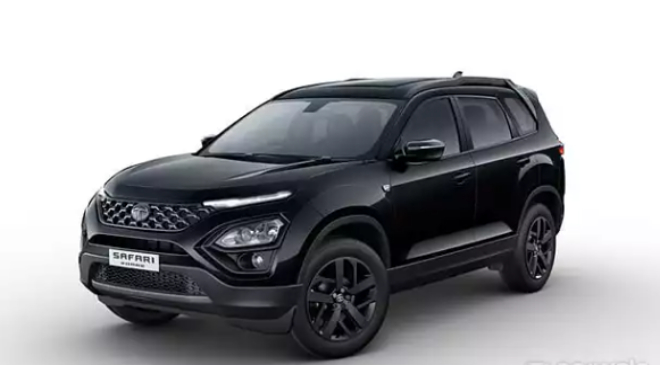 Earlier this month, Tata Motors launched the Safari Dark edition in the country, with prices starting at Rs 19.06 lakh (ex-showroom). The model is offered in three variants that include XT+, XZ+, and XZ+ 6S. Let us take a look at the changes to the Safari Dark over the regular variant in the picture gallery below.

The most significant change to the exterior design of the Tata Safari Dark edition is the Oberon Black paintjob.

The new variant gets a Piano black finish on various panels across the body such as the grille, headlamp bezels, and the roof rail inserts.

On the front fenders, the Safari Dark edition gets a Dark badging.

On either side, the blacked-out treatment continues not only on the body, but also on the 18-inch alloy wheels.

Also on offer is a dark chrome interior package, visible on elements such as the steering wheel, AC vents, and the grab handles.

The dashboard of the Safari Dark gets a Blackstone matrix treatment.

In terms of upholstery, the Dark edition of the Tata Safari features Benecke Kaliko Blackstone leather upholstery with Deep Blue tri-arrow perforations and ‘#Dark’ embroidery on the front head-rests.

The new edition of the Safari SUV also comes equipped with a panoramic sunroof.

Feature additions over the regular version of the model include ventilated seats for the first and second row (latter only for six-seat variant).

The infotainment system in the Safari Dark gets wireless function for Apple CarPlay and Android Auto.

The Tata Safari Dark edition continues to be powered by a 2.0-litre Kryotec diesel engine producing 170bhp and 350Nm of torque. This motor is paired to a six-speed manual unit and a six-speed torque converter automatic unit.