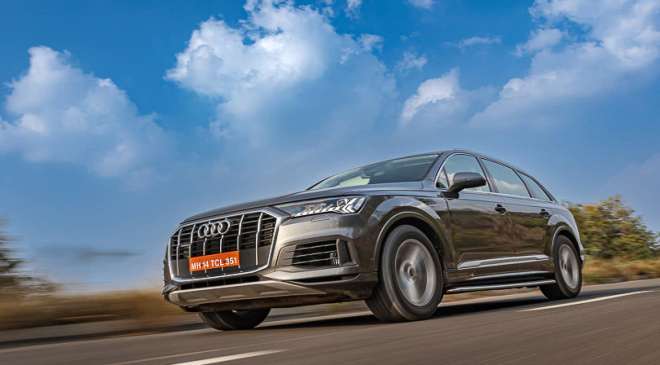 The Q7, now in a petrol-only avatar, is back on sale in India after a long hiatus

The Audi Q7, launched at Rs 79.99 lakh (ex-showroom), is finally back in its facelifted avatar after an almost two-year hiatus. Unlike the pre-facelift model, the Q7 is now a petrol-only SUV after Audi’s decision to ditch diesels in the BS6 era. It’s offered in two broad trims: Premium Plus and Technology.

Take a look at the detailed variant-wise prices:

Starting with the design, the larger grille with vertical chrome slats, flanked by new adaptive Matrix LED headlights and larger air dams give the front end a bolder appearance. Apart from that, all the changes are subtle, like the new set of 19-inch 5-spoke alloy wheels. That said, a dual-tone outfit would have added a premium appeal. At the rear, the LED tail lamps with dynamic turn indicators, now connected by a chrome strip, round off the design.

Inside, the Q7’s dashboard design is now similar to more expensive Audis like the Q8 and e-tron. The highlight, of course, has to be the dual screen setup that comes to life from the expanse of gloss black plastics. Audi’s virtual cockpit is also available, and the layout, graphics, and user interface is top notch.