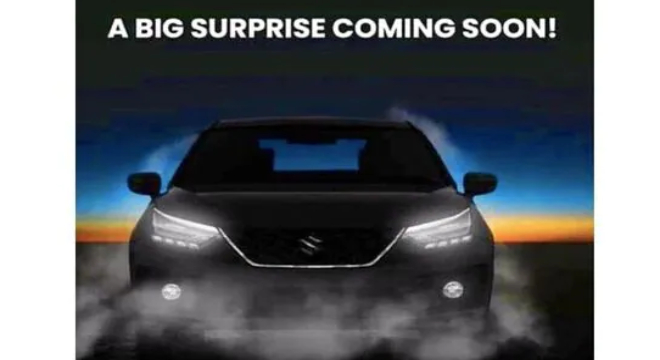 Maruti Suzuki Baleno facelift is likely to go on sale in the Indian market by the end of February.

Maruti Suzuki Baleno facelift is all set for an India launch in the months to come. While the updated Baleno hatchback was spotted on assembly lines a few days back indicating that production has commenced, its official teaser has now surfaced on the internet, highlighting some of the front-end exteriors of the model.

The 2022 Baleno is most likely to go on sale in the Indian market by the end of February, and the official bookings will also commence soon.

As per the newly leaked image, the facelifted Baleno will feature full LED headlamps with integrated LED DRLs. Also, there will be an updated grille sporting a chrome insert. The Baleno will also get revised LED fog lights, air dam, and a remastered front bumper.

Previous reports have also indicated that the Baleno will be updated with several other exterior elements such as new alloy wheels, wraparound two-piece LED tail lights, an integrated spoiler with a high-mounted stop lamp, a shark-fin antenna, and a redesigned rear bumper with reflectors which will be higher placed in comparison to the old model.

The 2022 Baleno is also likely to feature an updated cabin to keep evolving Indian customers interested. Expect changes in the form of a new flat-bottom steering wheel and more convenience and connectivity features like a a new infotainment system and a possible re-design of the dashboard and AV vent layout.

At the heart of the new Baleno is likely to be the same 1.2-litre petrol engine which will come mated to a five-speed manual unit and a CVT unit. When launched, the car will continue to rub shoulders with the rivals such as the Hyundai i20, Tata Altroz, Toyota Glanza, as well as the Honda Jazz.