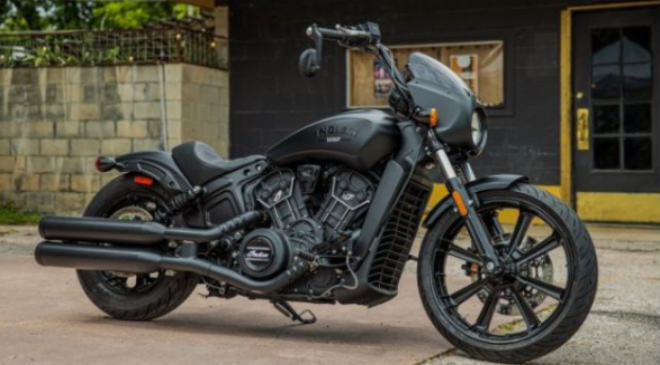 The 2022 Indian Scout Rogue has dropped veils to show its all-American attire. The motorcycle features a 1,133 cc V-twin motor and sports a quarter-fairing at the front.

Indian Motorcycles has taken the covers off the 2022 Scout Rogue. The company claims that it is the most aggressive iteration of its Scout range so far. The 2022 Indian Scout Rogue remains the fourth motorcycle in the American brand’s 1,133 cc motorcycle portfolio.

The Indian Scout Rogue looks distinctive in comparison to other motorcycles in the Scout line-up. It features a quarter fairing on the front. To give it an iconic silhouette, Indian Motorcycles has also used a mini-ape-hanger-type handlebar and a curvy single-piece seat.

A darker theme for the Scout Rogue is put to use, which further elevates its overall appeal. Elements like the handlebars, wheels and engine casing are finished in a shade of black. To ensure cohesion in the design, the manufacturer is also offering darker paint schemes with the Indian Scout Rogue. It will be available in six shades – Black Metallic, Black Smoke Midnight, Black Smoke, Sagebrush Smoke, Storm Blue, and Stealth Grey.

“For so many motorcyclists, riding carries a rogue spirit – a bold statement of freedom and individuality that brings riders together – and Scout Rogue delivers that in spades,” said Aaron Jax, Indian Motorcycle Vice President. He further added, “It’s an attitude that can only be found on a motorcycle, and it creates a totally unique level of camaraderie and community, and that’s what Scout Rogue is all about.”

The Scout Rogue sits 129 mm above the ground, with a seat height of 649 mm. The dry weight is claimed at 238 kilos, while it will be available with a single seat from the factory. The backrest and seat for the pillion rider can be bought as an accessory.

For the powertrain, a 1,133 cc V-twin motor does the job here. It develops a peak power output of 100 hp. Transmission duties are performed by a 6-speed unit. The front-end features telescopic forks, while the rear-end gets dual shock absorbers. As an accessory, a piggy-back setup can also be bought for an added travel of 51 mm. The 2022 Indian Scout Rogue rides on a 19-inch rim on the front and dons a 16-inch rim at the rear. Talking of tyres, they come from Metzeler.