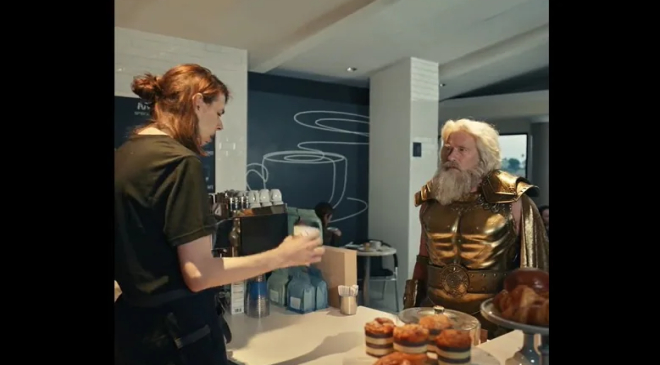 BMW has released a new teaser for its upcoming TV commercial, which will star actor Arnold Schwarzenegger. The Ad, which appears to be for the company’s EV division, BMW i, will premiere in the US during the Super Bowl weekend, on February 13, 2022.

BMW has put out a special teaser that stars none other than American superstar action hero, Arnold Schwarzenegger. What’s even more interesting is that Schwarzenegger is starring in the video as the god of the sky and thunder, Zeus. Now, BMW has been very cryptic about what this whole escapade is, however, we believe it’s the teaser for the company’s EV division, BMW i’s new TV commercial which will premiere during the Super Bowl weekend, on February 13, 2022. Now the Super Bowl is essentially the annual championship game of the American National Football League. Owning to its tremendous coverage and popularity, the event has been used by major brands for promotion.

Now the funny teaser shows a barista wrongly pronouncing the name of Zeus written in the coffee cup, when Arnold comes in a Zeus to take his order, giving an angry look. In its Instagram post, BMW says “Macchiato with a side of thunder. Just like the way we like our coffee in the morning. Catch Arnold Schwarzenegger as Zeus on February 13.” At the same time, in its Twitter post, the company said, “Something electric is brewing. 2.13.2022 #BMWElectric” which could either mean the upcoming commercial is from its electric/hybrid vehicle division, BMW i, or the carmaker might be revealing a new EV in its new Super Bowl Ad. Tell us what you think in the comments below?

Interestingly, BMW has also released a couple of other teaser images on social media which, along with Arnold, shows actor Salma Hayek and Ralf Moeller, as goddess Hera and the god of the sea Poseidon, respectively. This means we are likely to see more teaser videos, featuring the other two actors before the final commercial is released on February 13.

BMW is expanding its electric portfolio, and globally we have seen newer models like the iX3 electric SUV, i4 electric sedan, and the iX electric SUV among others. In fact, the BMW iX was launched in India in December 2021, making it the first EV to be launched by the company in the country. Later this year, the carmaker will also bring in the MINI SE electric and the BMW i4 to India.