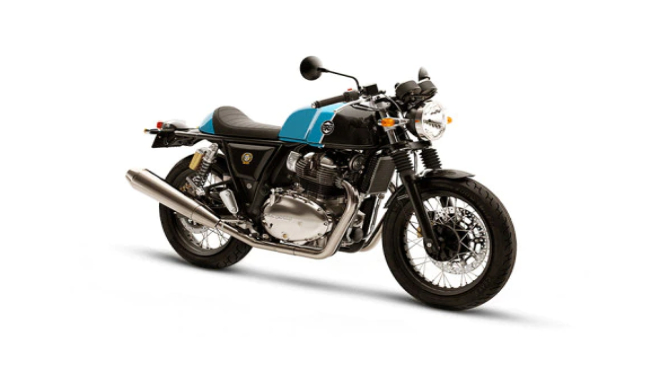 Royal Enfield has revised the prices of its entire range. Its flagship cafe racer, the Continental GT 650, has received a price hike ranging from Rs 4,701 to Rs 6,510 depending on the variant. Check out our story for more details.

Royal Enfield unveiled the 120th Year Anniversary Edition of the Continental GT 650 at this year’s EICMA show. Apart from an exclusive colour scheme, it also comes with unique touches making the motorcycle much more special than the regular variant. You can read more about the special edition version here. And as for the on-road pricing, check this out. Sadly, you cannot buy this variant anymore as it flew off the shelves in under two minutes after the sales window opened on December 6!

For 2021, the Royal Enfield Continental GT 650 received four new shades: Rocker Red, British Racing Green, Ventura Storm and Dux Deluxe. The Mister Clean chrome shade has also been left untouched. Aside from these new colours, all models (barring the Dux Deluxe) now arrive with black fenders and black spoke rims. Fork gaiters are standard as well. Even though the prices for the 2021 Continental GT 650 went up considerably, the bike provides an authentic cafe racer experience that no motorcycle in its price range can match. More details on the update in this story.

The Continental GT 650 draws power from a 648cc, air and oil-cooled parallel-twin motor that makes peak power of 47.6PS at 7100rpm and 52Nm of torque at 5200rpm. A 6-speed transmission assisted by a slip-and-assist clutch transfers power to the rear wheel via chain drive. The chassis is an all-new dual-cradle frame that has been developed by Harris Performance. Suspension duties are handled by 41mm telescopic forks at the front and twin gas-charged shock absorbers at the rear with preload adjustability. The bike is anchored by a single 320mm disc mated to a ByBre four-piston calliper up front and a single 240mm disc brake at the rear. Dual-channel ABS comes right off the shelf. Royal Enfield has equipped the Continental GT 650 with Ceat Zoom Curve tyres.

Coming to the design and features, the Continental GT, in proper Cafe Racer fashion, gets clip-on handlebars that are slightly taller than before, single seat with a race cowl, and blacked-out spoke wheels. The fuel tank on the Continental GT 650 is smaller (12.5litre) than its predecessor, the Continental GT 535, which had a 13.7litre tank. Going by the retro theme, the bike gets a twin-pod analogue speedometer which houses a small digital display with readouts such as the odometer and two trip meters. Simplicity carries over to the headlight, tail light and turn indicators as well where it uses conventional bulbs instead of LEDs.