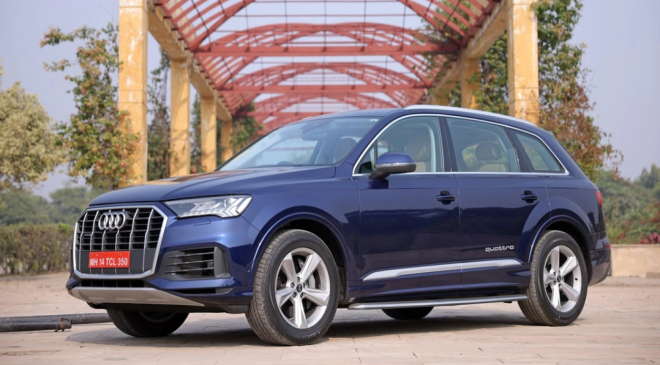 The Audi Q7 had been missing from Audi’s India portfolio for some time. Now the big luxury SUV is back. All the details here.

Audi India has announced the prices of the new Audi Q7. The Audi Q7 will be available in two variants with the Q7 Premium Plus priced at Rs 79.99 lakh and the Q7 Technology priced at Rs 88.33 lakh (both prices ex-showroom).

The car is returning after a two-year hiatus, and in its newest facelifted form gets updates along the lines of the current generation of Audi cars both in cosmetic updates and features. The new 2022 Audi Q7 is only available in a single variant, the 55 TFSI, and in two trims – Premium Plus and Technology.

The new Audi Q7 gets a facelift in form of a new single-frame grille, matrix LED headlights and a redesigned front bumper. In profile one can spot the new 19in wheels and at the back there are a pair of new LED tail light clusters as well. Audi has also thrown in a new panoramic sunroof on the 2022 Audi Q7.

Audi is known for its advanced tech, and the new Q7 boasts of a good number of them like the four-zone climate control, ventilated front seats, Bang and Olufsen audio system, panoramic sunroof, 360-degree camera system, parking assist, 30-colour ambient lighting and many more. Of the two trims, the Technology will come packed with more tech compared to the Premium Plus.

As far as powertrains are concerned, the new Audi Q7 will not be offered with a diesel engine. Powering the Audi Q7 is a 3.0-litre, V6, TFSI petrol engine with a 48V mild-hybrid system that is capable of producing a maximum power output of 340bhp and 500Nm of torque. This motor is paired to an eight-speed automatic transmission sending power to all four wheels via the signature Quattro all-wheel-drive system. The Audi Q7 can sprint from 0 to 100kmph in just under 6 seconds and all the way up to a top speed of 250kmph.

Commenting on the launch, Balbir Singh Dhillon, Head of Audi India, said, “There is no better way to start the year than launching a car that has been an absolute favourite in India. The Audi Q7 has been an icon of our Q-range for several years and we are confident that the latest model will be as successful with its new look and upgraded features. The Audi Q7’s versatile performance, both on and off the road, is a key trait that makes it stand apart from all others.”

Rivals of the Audi Q7 include the likes of BMW X5, Mercedes-Benz GLE, Volvo XC90 and the Land Rover Discovery.

The prices mentioned above are introductory.