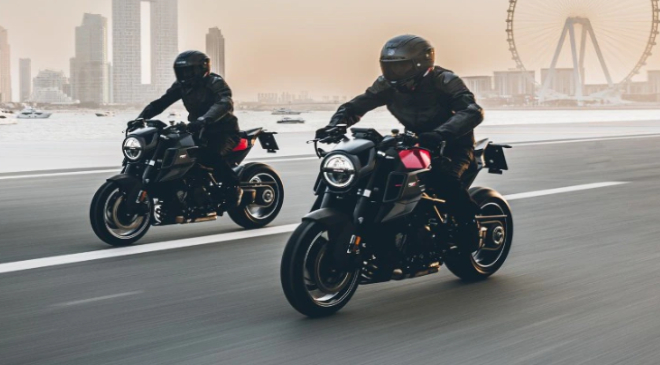 Brabus, the German high performance tuning company, has unveiled the 1300 R, a performance bike based on the incredible KTM 1290 Super Duke EVO. Brabus, known for tuning and customising cars, particularly Mercedes-Benz, has now entered the motorcycle space with the 1300 R.

At the heart, the bike remains the same as the Austrian hooligan, but on the outside it gets loads of updates and a cafe racer treatment. In terms of styling, the 1300 R resembles the Husqvarna bikes with an edgy yet tastefully done body design. The new carbon fibre air intakes don’t just look sharp but are also functional, offering better air flow. The 15.9-litre fuel tank gets a carbon fibre trim, along with that, the headlight shroud and tail, too, are made from carbon fibre. The bike features a circular headlight setup that really changes the look, giving it a more cafe racer vibe. Additionally, it gets a thicker custom heated seat that raises the saddle height to 843.28mm, 7.62mm more than the Super Duke EVO.

Powering the 1300 R is the same engine as the Super Duke EVO: a 1301cc, V-Twin engine producing 180PS and 140Nm. KTM’s LC8 engine has been an incredible performer, pushing the limits, and it is exciting to see what that engine can do with this setup. The bike features a matt black ceramic-coated twin exhaust, designed to optimise back pressure. Additionally, the bike also features ride modes: Rain, Street, Sport, Track, and Performance. Each of the modes offer different levels of throttle control, traction control, stability control, motor slip regulation, and anti-wheelie function. Other notable features include quickshifter, slipper clutch, cruise control and cornering ABS.

The Brabus 1300 R is underpinned by the same trellis frame that the Super Duke employs, but in a black colour scheme instead of the KTM orange. The bike is suspended on a WP APEX 48 front fork that gets electronically-controlled damping feature and WP APEX monoshock at the rear which, too, is electronically adjustable. The braking duties are handled by top-spec Brembo Stylema four-piston monoblock callipers, along with a carbon fibre cooling duct on the front brakes and nine-spoke alloy wheels.

The features on the bike include switchgear, controls for navigating settings and the five-inch TFT display borrowed from the Super Duke EVO, but with a special Brabus startup animation. Brabus has equipped the 1300 R with an adjustable handlebar and a CNC-milled fully adjustable hand levers.

The German automaker has priced the 1300 R at 35,549 GBP (around Rs 35.28 lakh) in the UK. The asking price is really high, even compared to the Super Duke EVO, which costs almost half of that. However, when you are asking for looks, performance and the exclusivity that comes with such a bike, maybe it is a fair deal.The Brabus 1300 R is exclusively available via the KTM online pre-order portal at the above mentioned price. Pre-order starts on 14th of February at 15:00 CET. Buyers will be required to make a GBP 2,500 down payment on the website.

The 1300 R gets two colour schemes: Magma Red and Signature Black, with only 77 units available for each colour option. The 77 units availability is to signify the year 1977, when Brabus was formed.
Summing up, the Brabus 1300 R certainly looks like the perfect neo-retro rendition of the Austrian hooligan. It’s got gorgeous looks, and proper performance to back it up. It will not be heading to our shores any time soon, but if you’re looking for a premium performance-packed naked, the Ducati Streetfighter V4 S is the most extreme one out there in the Indian market.