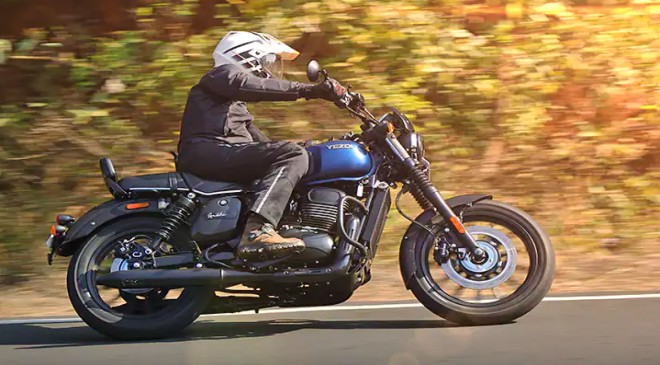 The Yezdi Roadster is the entry-level model in the new Yezdi motorcycle range. It also is closest in design to the Jawa Forty-Two and the original Yezdi bikes of the 1970s.

The Yezdi Roadster is the modern-classic roadster in the new Yezdi motorcycle range and has design somewhat reminiscent of the original Yezdi bikes from the 1970s. It’s designed for everyday use, for the daily commute and short dashes in and around the city. In a way, the Roadster is the true modern “classic” of the new Yezdi family, yet with all the modern trappings and features, such as an LCD instrument console, LED lighting, liquid-cooled, double overhead cam (DOHC) engine and anti-lock braking system (ABS). But is it any good? We spent a couple of hours with the Yezdi Roadster to get to know it better.

The silhouette and stance of the Yezdi Roadster is definitely closest to the original Yezdis, but closer to the modern Jawas than any of the other Yezdi bikes. It comes with a single, round, LCD display, along with round LED headlight, taillight and LED indicators. ABS is standard and not switchable, and unlike the more purpose-built Yezdi Scrambler and Yezdi Adventure models, it gets just one level ABS.

With a long wheelbase (1,440 mm) and raked out steering, the Roadster looks somewhat of a mix between a retro roadster and a cruiser. To me, it works from some angles, and from other angles, it just looks a little out of place.

But the subject of aesthetics is subjective, and while its styling may not work for some, it may prove to be attractive to others. But the more practical problem with the Roadster’s design is in the company it keeps to its prospective customers. With a design that is closer to the Jawa Forty-Two, than the older Yezdis of the ’70s, the Roadster’s biggest weakness is that it will share showroom space with not just the more attractive Yezdi Scrambler and the rather purposeful-looking Yezdi Adventure siblings, but also with its good-looking Jawa cousins. But where it makes up over the Jawa models is in the spec sheet, at least over the Jawa Classic and the Jawa Forty-Two.

The Yezdi Roadster’s engine has been tuned with everyday use in mind and has the narrowest powerband amongst the three new Yezdi bikes. The 334 cc engine has been tuned to make 29.3 bhp at 7,300 rpm with 29 Nm of peak torque at 6,500 rpm. The engine sounds a lot like the Jawa Perak it’s derived from, and performance is also somewhat similar.

It will happily rev all the way to the redline and is up for a handful of throttle as you accelerate through the gears. The gears slick into position with precision and triple digit speeds are achieved quite effortlessly. In a straight line, the Roadster does remind you somewhat of the old Yezdis; with a somewhat similar riding position, and with dynamics you would expect from a long wheelbase roadster.

The suspension is on the firm side; isn’t too harsh, but not the plushest as well. Ride quality isn’t the cushiest, and over broken patches, the Roadster does make you feel road imperfections. It’s not torturous, but it isn’t exactly the most comfortable in this segment either. The seat however is well-padded and offers a comfortable perch, at least during our brief test ride. The firm suspension however invariably leads one to make comparisons with its cousins, the Jawas. And that’s where expectations of the Roadster’s dynamics come in.

As an everyday motorcycle, the Yezdi Roadster’s engine has been tuned for precisely that kind of use; short dashes around town, and for the occasional long-ish jaunt if required. It also has the least suspension travel and ground clearance amongst the three new Yezdi models. But it’s also the only model which sports alloy wheels with tubeless tyres.

For me, the stance and overall design of the Yezdi Roadster is somewhat of a hit and miss, and even in the dynamics front, I would say the Jawa Forty-Two feels more agile and planted, in comparison. But if it’s a true-blue nostalgia-filled Yezdi you’re looking for, the Yezdi Roadster still looks the closest to the old 250 cc two-stroke Yezdi bikes from the ’70s.0Comments