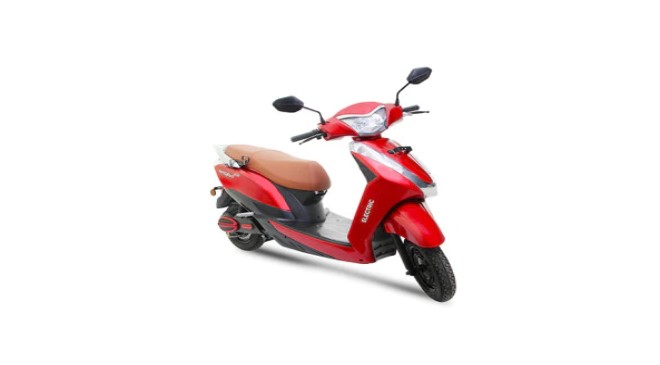 Ampere Vehicles has announced a massive price cut for the Magnus Pro following the revised Fame-II subsidies for 2021. The scooter comes in a lot cheaper than before with Rs 9,000 being knocked off its price. Read about it here.

It’s powered by a 1.2kW motor that can propel it to a top speed of 55kmph, but despite the instant torque that an electric motor offers, the Magnus takes a leisurely 10 seconds to accelerate to 40kmph from a dead stop. The Ampere Magnus Pro uses two riding modes: Eco and Cruise. It is claimed to offer up to 100km in Eco mode whereas, in Cruise mode, the range drops to about 80km. Its 60V, 30Ah lithium-ion battery is removable, which means you can simply remove the battery and charge it at your workplace or home. It takes 5-6 hours to charge completely via a conventional 5 amp socket. The scooter uses a telescopic fork, twin rear preload-adjustable shock absorbers, and 130mm drum brakes at both ends. Its 10-inch steel wheels are shod with tubeless tyres. A ground clearance of 150mm is good enough to go over our pothole-riddled roads with ease.

The Magnus looks more conventional than some of the other electrics from non-mainstream manufacturers. It isn’t the prettiest or the most attractive scooter, but it is simple and elegant. Highlights include some chrome garnish on the apron, lightly creased side panels, and clean lines overall.

In terms of features, the Ampere Magnus Pro gets LED DRL, bulb indicators, and tail lamp. Even though the bezel is large, the instrument cluster LCD display is pretty regular sized. The scooter may be short on features, but it makes up for it by offering simpler yet practical features, including an apron-mounted storage space with an integrated USB port, a utility hook on the apron, keyless entry, and even anti-theft alarm. The underseat storage is large enough to accommodate a small half-face helmet and a couple knick-knacks. It also gets an LED light placed in the boot for added convenience.

As far as competition goes, the Magnus Pro goes up against the Gemopai Astrid Lite and Okinawa Ridge Plus. In its price range, you could also check out petrol-powered scooters such as the Honda Activa 125, Suzuki Access 125, and Hero Maestro Edge 125.

The Ampere Magnus Pro is available in a single standard model.