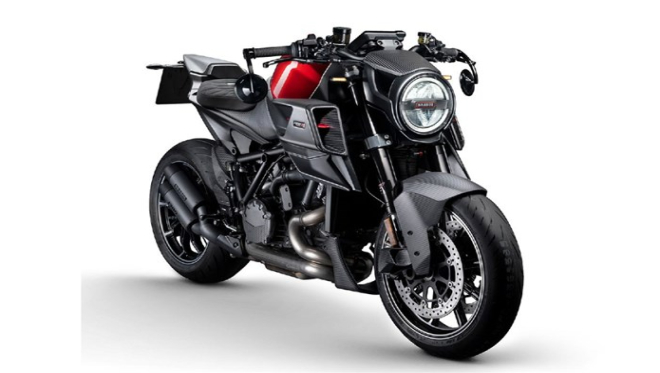 The Brabus 1300 R is limited to 154 units globally and is available in two colours, Signature Black and Magma Red.

German performance tuning company Brabus has teamed up with KTM to develop a unique offering –the Brabus 1300 R. Known for making some incredible, tuned Mercedes-Benz cars, the 1300 R is Brabus’ first motorcycle ever.

The Brabus 1300 R, essentially, is a KTM 1290 Super Duke R Evo that’s covered in Brabus’ unique bodywork and parts. It boasts of a number of handmade finishes lavished onto the bike, including a carbon headlight mask, carbon belly pan, along with machined triple clamp, machined adjustable front brake, and clutch lever. The chunky, 16-litre fuel tank and swooping minimal tail contribute to the motorcycle’s unique shape and it’s hard to tell that the Brabus 1300 R is a KTM underneath.

Other special touches on the bike include carbon air ducts that flank both sides of the fuel tank. These are not just cosmetic but also functional and are said to improve airflow. The bike also gets Brabus Monoblock Z Lightweight, nine-spoke forged wheels and a tastefully executed, black ceramic-coated double-pipe exhaust. Adding a touch of premiumness is the seat, which is set at 845mm, features a quilted pattern and can be heated as well.

The Brabus 1300 R is limited to only 154 units globally, divided equally for the two colours on offer – Signature Black and Magma Red. This means there are 77 units per colour and that number signifies the year 1977, which is when Brabus was established. To add to the feeling of exclusivity, its collection of bespoke, handmade details including a Limited Edition plate with each unit number.

Coming to the bits under the unique Brabus bodywork, the 1300 R shares the same engine as seen in the KTM 1290 Super Duke R. The 1,301cc, V-twin makes 180hp and 140Nm, and is mated to a 6-speed transmission that’s equipped with a slipper clutch. The frame is also the same as seen on the KTM and is suspended by WP Apex semi-active USD fork and monoshock. Braking duties are handled by 320mm discs at the front, with radially mounted Brembo Stylema Monobloc four-piston callipers, and a 240mm disc at the back, with Brembo twin-piston fixed callipers. It comes equipped with cornering as well as Supermoto ABS. Speaking of electronics, the bike gets similar ride modes as the Duke, as well as the same instrument cluster, albeit with a start-up graphic unique to the Brabus.

Pre-orders for the Brabus 1300 R will start on February 14 on KTM’s website.

Does the Brabus 1300 R make you wish they undertook more two-wheeled endeavours? Let us know in the comments below.