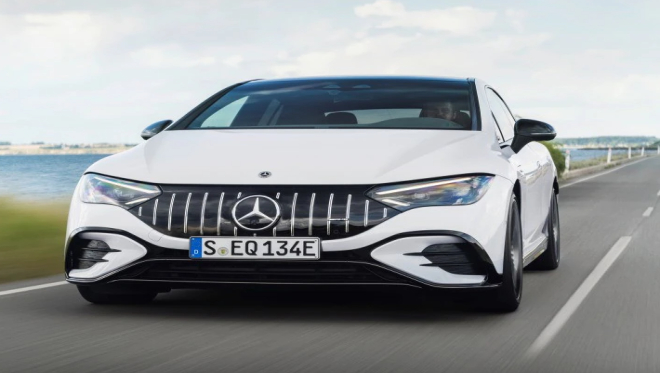 It takes barely 3.3 seconds to get to 100kmph, stellar for a performance sedan weighing over 2,500kg

Mercedes-Benz has taken the wraps off the AMG EQE performance sedan for global markets. The new electric vehicle (EV) comes in two variants – EQE 43 4Matic and EQE 53 4Matic. The Mercedes-AMG EQE will slot below the AMG EQS electric sedan, and it’ll rival the BMW i4 M50 and Tesla Model S global electric sedans.

It takes a keen eye to differentiate between the EQE and its AMG sibling. Up front, the performance variant gets a more aggressive bumper and an AMG-specific Panamericana pattern with vertical chrome slats on its covered grille, while the regular EQE gets a tri-arrow pattern. The AMG EQE also has a distinct set of 20-inch and 21-inch aerodynamic, lightweight alloy wheels shod with Michelin Pilot Sport EV tyres. A differently shaped bumper is the only change at the rear, but it adds drama to the fascia with its gloss-black diffuser and trim bits that remind us of dual exhaust exits on ICE performance cars.

Inside, the Mercedes-AMG EQE has a dark cabin theme with red accents and red ambient lighting. It gets a similar three-spoke AMG steering wheel as other Mercedes performance variants and sports seats upholstered in artificial leather. The glorious MBUX Hyperscreen, albeit with AMG-specific graphics, are similar to the stock EQE sedan, but the EQE 43 and 53 get ‘AMG Track Pace’, a data logger for use on the racetrack.

You can get the base-spec EQE with a rear-wheel-drive electric powertrain. But Mercedes’ AMG division is serious about performance, and even the EQE 43 gets 4Matic dual-motor all-wheel-drive and standard rear-wheel steering. Its two motors together produce 476PS and 858Nm, enough to propel the 2.5-ton electric sedan to 100kmph in just 4.2 seconds.

The EQE 53 4Matic offers 626PS and 950Nm, good for a sports sedan-beating acceleration time of 3.5 seconds. If that doesn’t whet your appetite for speed, you can opt for the AMG Dynamic Plus package that dials the power up to 687PS. It makes 1,000Nm of torque, and scoots to 100kmph in 3.3 seconds!

It’s too early to tell if Mercedes will bring its performance electric car to India, but given that the EQS electric sedan is set to be locally assembled, our fingers are crossed. If launched, it could rival upcoming electric sports sedans such as the BMW i4 M50 and Tesla Model 3 Performance.