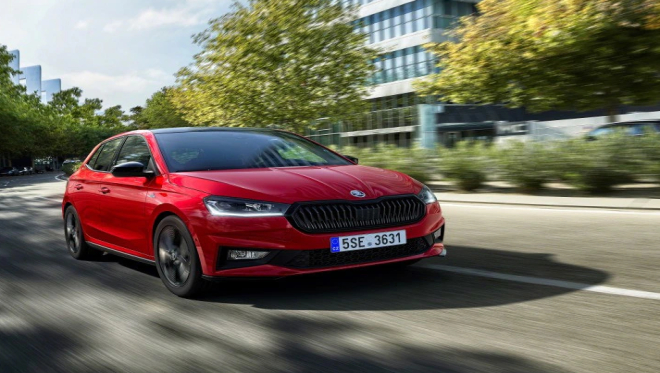 It gets the same 1.5-litre TSI turbo petrol engine as the Skoda Kushaq and upcoming Slavia

Skoda has unveiled the fourth-generation Fabia Monte Carlo for the UK and Europe. It gets a sporty exterior and interior and adds a new top-spec 1.5-litre turbo petrol engine to the Fabia’s lineup. It’s unlikely to be offered in India, but it has plenty of rivals in Europe, such as the Ford Fiesta ST-line and Renault Clio.

On the outside, the Fabia Monte Carlo isn’t as shouty as hot hatchbacks such as the Hyundai i20 N or the Toyota GR Yaris. It has a blacked-out grille, a contrast black roof, and special black ‘Proxima’ 16-inch and ‘Procyon’ 17-inch alloy wheels. It’ll also be available in European countries with 18-inch black wheels.

In the absence of a Fabia vRS, the top-spec Monte Carlo variant is the quickest variant available. It’s powered by a 150PS 1.5-litre TSI turbo petrol engine paired with a 7-speed dual-clutch automatic gearbox, good for a claimed 0-100kmph time of eight seconds. The Monte Carlo trim is also available with 1-litre TSI engines in 95PS and 110PS states of tune, and you can even get the special trim with a 90PS 1-litre MPI engine.

The Skoda Fabia Monte Carlo is unlikely to make it to India, but we’ll soon get the same 1.5-litre TSI EVO turbo petrol engine in the Slavia sedan. To know how the engine performs in Indian conditions, head to our Slavia review.