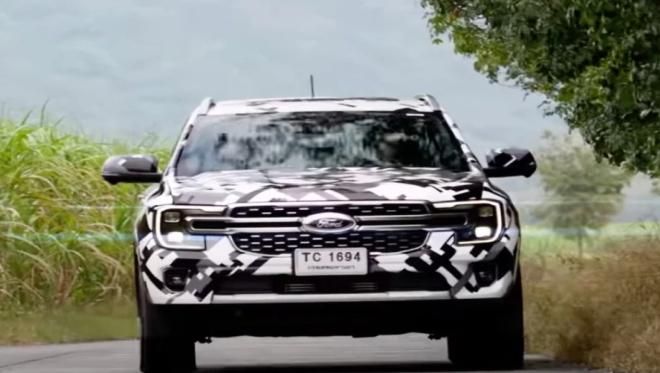 The next-gen Ford Everest, known as the Endeavour in India, will be unveiled in Australia on March 01. It will share most of its underpinning with the new Ranger, and promises to be more premium and capable than ever before.

A glimpse at its fascia makes it evident that the Endeavour shares its roots with the Ranger. The headlamps, grille, and bumper design are almost identical to the pickup truck. Ford has also done a good job of integrating the body; and while the profile looks simple, the dual-tone alloys jazz things up. At the rear, the SUV gets new LED tail lamps with an inverted ‘L’ motif.

Inside, once again, the Endy should share most of the design touches with the Ranger. The pickup gets a minimalist dashboard with all the features and function thrown into the portrait-oriented touchscreen infotainment system. Also, the SUV should get the digital driver’s display and steering wheel from the Ranger.

The Endeavour’s existing 170PS 2-litre single-turbo and 213PS 2-litre bi-turbo diesel engines should be carried forward, paired with manual and automatic options. Apart from that, the SUV could get the new 3-litre V6 petrol that debuted in the Ranger. More powertrain options could be offered and they could be market specific.

Ford’s future in India is still in turbulent waters and a clear cut answer about its future still needs to be known. Yes, the American carmaker is planning to bring exotic models as CBU, and we hope the Endy is also part of the plan. More details about the Endeavour will be announced as we head closer to its launch date.