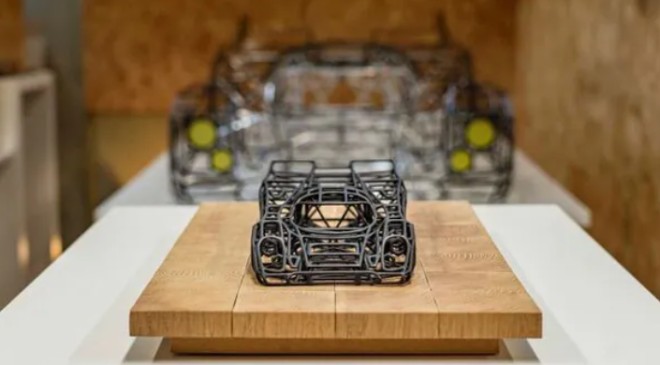 British artist Jonny Ambrose has been making three dimensional artworks depicting silhouettes and details from classic road and race cars from Porsche, celebrating the sports car maker’s greatest moments in motorsport. Various enthusiasts and collectors commission interpretations of their own vehicles as well as some of the 20th century motorsport icons.

A full-time artist since 2016, Ambrose’s sculptures’ design language celebrates the shapes created by race car designers, using a mix of solid woods and aluminium to resin and carbon fibre, often gently exaggerating their aerodynamic forms to create a visceral sense of speed.

The artist’s shelves are dotted with 3D sculptures of Porsche 917 and 911 models, details of fenders, spoilers and wheels or longtail body sections. His narrow shelves are filled with miniature 3D printed models – elongated interpretations of familiar Porsche outlines – and more substantial sculptures of a 904 Carrera GTS and ‘Mary Stuart’ 911 RSR.

Ambrose has recently also started using 3D printing technology for his automotive sculptors. He began with a series of small printed models based on the 917 in its various guises. However, these more automated processes of CAD and laser printing remain counterbalanced the artist’s love of artisanal craftsmanship thanks to his traditional skill of steam bending wood. Though it is a painstaking process, it produces complex forms that cannot be replicated with more modern methods.

The half-scale Porsche 917 that he is working on is based on the 1971 Le Mans winner. Speaking about his future projects, the artist said, “My ambition this time is to do a full-scale model in the same vein as the 917, hopefully as a centre piece of an exhibition or show.” He added, “Porsche celebrates the 40th anniversary of the 956 next year, which creates a fascinating if challenging proposition for me.”