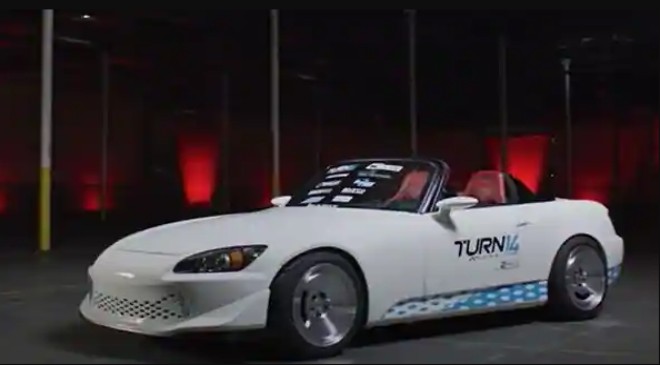 A team of car enthusiasts has converted a Honda S2000 into an electric vehicle using a Tesla electric motor.The EV can produce massive power of 500 hp.

A video has surfaced on the internet that shows a Honda S2000 that has been converted into an electric vehicle and the highlight of this EV is that it is powered by a Tesla motor.

Built by Ryan of Rywire Motorsport Electronics, someone at a glance may find the front of this Honda roaster is similar to the Volkswagen ID.

range. The creator and his team used a set of aero wheels on the EV to complete its look.

Now the powertrain of the converted vehicle might be the focal point as it is a Tesla drive unit and can generate a power output of 500 hp. The electric motor has been mounted at the rear of the vehicle and it draws power from another small battery pack which are two Chevy Volt battery packs with a total capacity of 38 kWh. This revamped electric vehicle will provide the user with a range of up to 193 km.

The video has been uploaded on YouTube and it has garnered quite a significant number of views. Many posted positive comments about the conversion and some went ahead to say as EVs are expensive, one may find these conversions as a normal trend in the coming days.

Honda introduced the S2000 model in 2001 and it featured a highly compact, 2.0-litre, DOHC VTEC engine that produced power of 240 hp and a maximum torque of 207 Nm. It offered an electric power steering system along with a race-car-type digital instrument panel. The engine of this model met the low-emission vehicle standards as well. The car’s six-speed manual transmission gave it a high-performance quality. The Honda S2000 was capable to touch the speed of 96 kmph from stationary in less than 6 seconds.