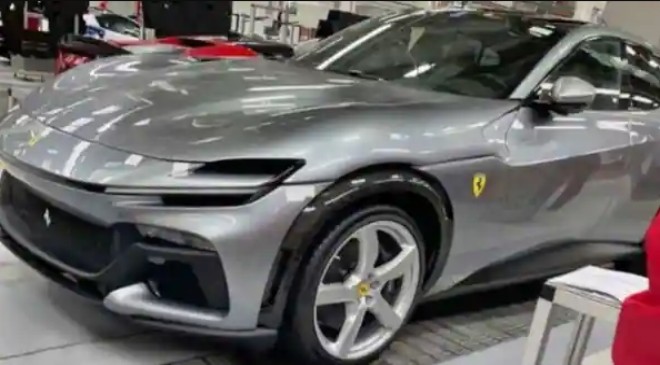 First images of the Purosangue, Ferrari’s first SUV, was leaked on social media ahead of its possible launch

First-ever SUV from Ferrari, called Purosangue, has entered the production line. The SUV, which is likely to be a five-door model with four-seat layout and a coupe-ish profile, has been revealed in leaked images ahead of its possible launch next year.

Ferrari is betting big on Purosangue to enter the luxury SUV segment, which is considered as a key point for the Italian brand to grow its sales number.

Ferrari plans to manufacture around 10,000 units of the Purosangue SUV every year. It will take on the likes of Aston Martin DBX, Porsche Cayenne and Lamborghini Urus as rivals when launched.

The Ferrari Purosangue SUV will be officially break cover in 2023. It has already been seen in camouflage a number of times. The leaked images reveal the front face and the rear section of the SUV.

At first glance, the Ferrari Purosangue’s design does not resemble any conventional SUV. The height of the SUV seems much less than other models as it sits lower, more like a sports car. The front face of the Purosangue SUV resembles that of the Ferrari Roma, with which it shares the same platform.

The lower part of the SUV shows a uniquely designed fender. The large wheel arches also stand out. At the rear, the design of the Purosangue SUV appears more similar to the one that is also seen on the 296 GTB.

Ferrari is likely to offer the Purosangue SUV with a hybrid powertrain, with an internal combustion engine at the front axle and an electric motor at the rear. According to reports, the Purosangue SUV will have a 3.9-litre twin-turbo petrol engine under the hood. The same engine is also used in the Roma and F8 Tributo. The 2023 Ferrari Purosangue SUV is also likely to get all-wheel drive option with a dual-clutch automatic transmission.