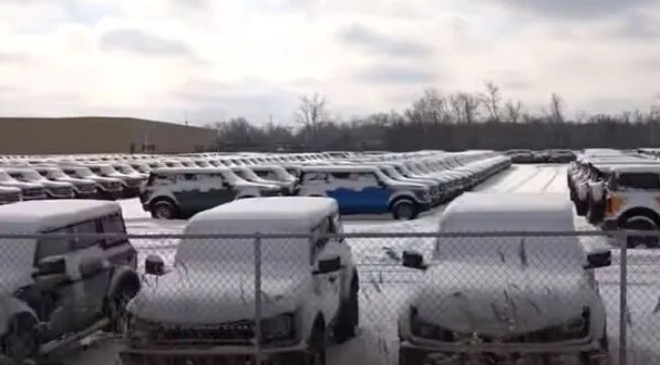 Many in the US are waiting to get a Ford Bronco home with waiting period extending up to months and months due to chip shortage.

Ford Motor Company has been facing the brunt of semiconductor shortage and a recently surfaced video shows a sea of snow-covered Bronco SUVs waiting in the open for chip installation. The video was captured outside the company’s Michigan factory and is being called ‘Dirt Mountain’ and ‘Ice Mountain’ by Bronco forum members.

The SUVs are waiting for chips to be installed in them before they can make their way to their owners. But YouTube channel KenStevens5150’s video shows that these brand new Broncos are actually in a very sorry state, covered with lost of snow and dirt, almost losing their charm of newness.

In the video, the YouTuber takes a slow ride around the Ford plant, giving viewers a detailed view of all the Broncos lined up. The entire roof and hood of all these vehicles are covered in snow, and thus the vehicles are aptly being called ice mountain.

Many in the US are waiting to get a Ford Bronco home with waiting period extending up to months and months. It is safe to assume that the Broncos lined up in the Ice Mountain will not reach their owners before May or June this year.

Due to the delays in delivery of Bronco SUVs, Ford has proactively reached out to some owners by providing them gifts as a way of thanking them for their continued patience. One such offering was a Bronco-branded backpack full of survival supplies that had originally been available online for sale but had since been discontinued.

Last September, the carmaker set up a special customer ‘satisfaction fund’ for dealers so that they can personally ease the pain of their customers waiting to get a Bronco home. The fund could be used to give a variety of gifts to build customer relations such as branded merchandise, free maintenance and even free booze.