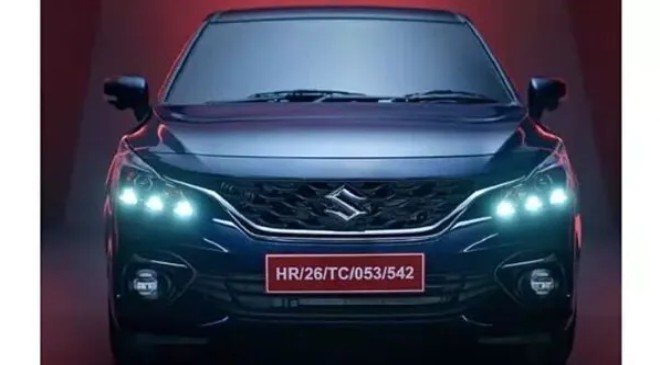 New-gen Maruti Baleno will get a tweaked face with wider grille and a new set of headlights with three-element DRLs.

Maruti Suzuki is gearing up for the introduction of the new Baleno facelift in the Indian market. The car is slated for its launch in India tomorrow. Pre-launch bookings of the new Baleno have also commenced in the country at a token amount of ₹11,000.

The company has now launched a TV commercial video of the car revealing new design as well as feature details.

On the outside, the Baleno facelift will sport a slew of new updates including a redesigned front main grille, a reworked hood, LED headlamps with integrated LED DRLs, and LED fog lights. In addition to that, the car will also feature a new front bumper with chrome inserts and a wide air dam. Over the side, sharper looking 16-inch diamond-cut alloy wheels will be found, while the rear profile will get new two-piece LED tail lights, a chrome strip on the bootlid, an integrated spoiler with a high-mounted stop lamp.

The new 2022 Maruti Baleno will be a completely updated model inside out. In terms of cabin highlights, expect to see a Heads-Up Display (HUD) which will be one of the biggest additions inside the cabin of the car. Apart from that, it will also feature a new  nine-inch SmartPlay Pro touchscreen infotainment system with Apple CarPlay and Android Auto. Other key updates inside the car will include redesigned AC vents automatic climate control, height-adjustable driver seat, an Arkayms music system, six airbags, and rear AC vents.

Under the hood, the car will feature a 1.2-litre, four-cylinder petrol engine. This unit will be responsible for delivering 89bhp and 113Nm of torque. The transmission options on the car could include a five-speed manual unit and an AMT unit. It will also get an idle start-stop function for more fuel economy.