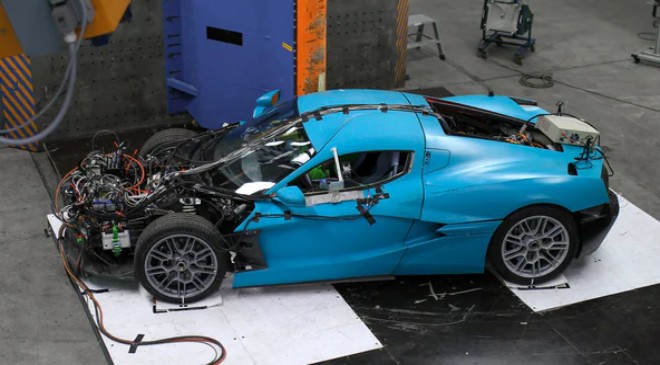 Rimac will manufacture only 150 units of the Nevara electric supercar.

Rimac has crash-tested nine of its Nevara electric supercars, which resulted in the Croatian car brand destroying more than $20 million. The EV maker crash tested these nine Nevara supercars in order to homologate them. The company claims that it took the automaker four years to get the Rimac Nevara homologation done.

Rimac Nevara is touted as the fastest accelerating road-spec car in the world that is capable of sprinting 0-96 kmph in just 1.86 seconds at a top speed of 415 kmph. The electric supercar comes with a price tag of $2.27 million. No wonder, the crash test of the nine highly expensive models was an eye-tearing affair for many car enthusiasts.

Rimac says that the Nevara prototypes were put through a total of 45 physical crash tests, which destroyed the nine models. These included a 32 kmph side impact with a pole. This test replicated sliding into a lamppost or a tree, which are common fate for supercars.

The other wide range of passive safety tests were done through computer simulations, saving the prototypes from destruction. The auto company says that engineers conducted thousands of digital trials using High-Performance Cluster computers that are capable of extremely detailed simulations.

While a physical crash test takes around 80 milliseconds, a single HPCC simulation could take as long as 20 hours of processing time, claims Rimac. The simulations are useful in telling engineers what kind of adjustments are required to get the actual crash test cars to pass. The engineers then make those changes to the real car’s design.

Rimac says that crash tests for the Nevara electric supercar in Europe were done last year and the final test for the US certification took place in January this year.

The Rimac Nevara is built on a carbon fibre monocoque chassis. Also, it comes with a large single piece of carbon fibre, which stretches from the front suspension to the rear. The automaker claims that Nevara is the stiffest production car ever built. The car brand will make only 150 units of Nevara. Rimac Nevara gets four electric motors powering each wheel, and a 120 kWh 6960-cell battery pack. The electric powertrain churns out 1,914 hp of power and 2,360 Nm of torque.