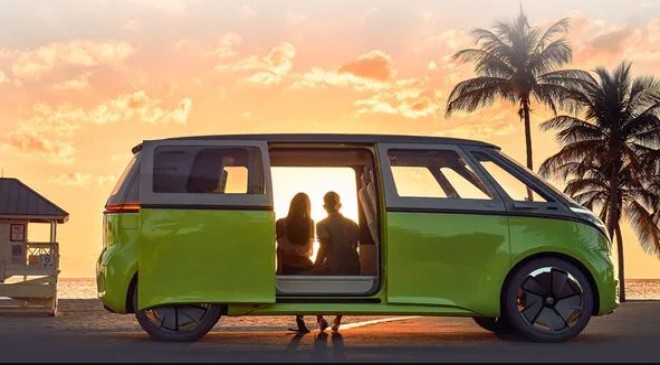 Volkswagen ID. Buzz will be available in two variants – passenger and cargo.

Volkswagen is gearing up to unveil its most awaited electric vehicle ID. Buzz and its cargo variant ID. Buzz Cargo on 9th March 2022. Ahead of that, the German automaker has revealed battery pack details of both these two EVs.

The ID. Buzz is based on the Volkswagen Group’s Modular Electric Drive Kit or MEB architecture. This means the EV will share its platform with other Volkswagen electric cars. It will come with a 2,988 mm wheelbase. Volkswagen has not revealed the range of the ID. Buzz but it is likely to offer a lower cruising range than ID.4. Speaking about the cargo variant, it gets a 150 kW electric motor integrated into the rear axle.

The Volkswagen ID. Buzz will be able to run at a top speed of 145 kmph, with the electric powertrain generating 201 hp power and 310 Nm torque.

The Volkswagen ID. Buzz concept version was unveiled in 2017 with a 111 kWh battery pack promising a 434 km range. With a dual-motor set-up, the EV was expected to hit 96 kmph from a standstill in five seconds. The EV will come with features such as fast charging technology, over-the-air (OTA) update, bi-directional charging etc.