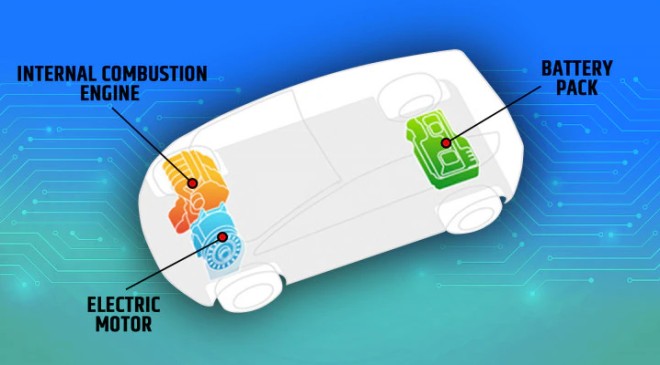 Confused between a conventional motor car or an electric vehicle (EV)? What if there was a third option?

Petrol or electric? This question has been fueling countless debates amongst new car buyers today. Of course, the future is electric. But there are many valid points that make buying an EV an inconvenience right now. That doesn’t necessarily have to mean that you have to fall back on conventional options.

But what if there was a solution that combines the convenience of a petrol engine car with the cleaner technology of an EV? A solution that is often overlooked by both manufacturers and consumers? Yes, we’re talking about hybrids.

Typical hybrid cars have a conventional engine, coupled with an electric motor and a battery. All of them work in tandem with each other. While manufacturers set them up in different states of tune, most of them work on a similar principle.

This process helps in maximising the fuel efficiency, just by making less use of the engine. But don’t you need to charge a hybrid? No. Most hybrids offered in India do not need to be plugged in. This is why they offer…

For many of us out there, investing in an EV right now is not an option. Be it because of their high purchase cost, the anxiety of always looking for a charging station or simply because of their limited range.

But this doesn’t mean we have to settle for petrol and diesel offerings. With the ever-increasing prices of fuel, the cost of commuting has gone up by an uncomfortable margin. Not to mention, running a petrol car itself is becoming a costly affair.

This is where hybrids come in.

You don’t need to charge them, and they are extremely efficient. Just like we mentioned earlier, a hybrid car comes with an additional, bigger high-voltage battery pack. This is different from your conventional 12-volt battery, which powers your headlights, instrument console and more.

This bigger battery pack automatically charges in a multitude of different ways. The most common method is regenerative braking. This system allows for the energy lost during braking to be captured and converted into electrical energy, which is then stored in the batteries. Hence, every time you use your brakes or coast, the batteries get a fresh charge.

As mentioned before, there are various types of hybrid systems. But most of them are narrowed down to….

A mild hybrid car uses a smaller electric motor and battery as compared to a full hybrid. Here, the primary propulsion is still carried out by the internal combustion engine. The electric motor only kicks in to assist and for an extremely short amount of time during acceleration.

For instance, in a mild hybrid setup, the engine automatically stops when you are at idle and starts when you show intent to get going. While this does help in increasing your fuel efficiency, the difference isn’t as substantial as a full hybrid, at around 2 to 3kmpl.

It can be argued that a “mild” or a “micro” hybrid setup are buzz words used by manufacturers to get you in the door. In real world use, they do not have a big edge over an EV or a conventional car.

A full hybrid setup makes use of a bigger, more powerful electric motor and battery. And hence, has a clear advantage over mild hybrids from the get-go. An FHEV makes use of the electric motor more frequently and for longer periods as compared to a mild-hybrid. This includes startup, crawling speeds and coasting.

In a full hybrid system, the engine shuts down at cruising speeds, and the drive is taken over by the electric motor. However, unlike a mild hybrid, the electric motor here can run for a longer period of time. It can also switch back and forth between the combustion engine as many times as required. This sequencing is handled by the car’s on-board software which also allows for different drive modes like “eco,” “city” or “performance.”

This cycle helps in extracting the best possible mileage from your car. For example, a full hybrid car is approximately 25% to 40% more efficient than your regular petrol or diesel offering.

Sounds like a win-win, right? So, why don’t we have them here in India? We actually do!

Did you know which was the first hybrid sold in India?

If Honda was on your Bingo card, then congratulations! The Japanese company launched the Honda Civic Hybrid back in 2008! It featured the company’s 1.3-litre i-VTEC engine, working together with an electric motor. During steady cruising situations, it can switch off its petrol engine and operate solely on the electric motor’s power.

For this, the Japanese manufacturer employed an IMA (Integrated Motor Assist) system, which worked alongside its highly efficient CVT transmission. The result was nearly 47 per cent more fuel efficiency compared to its internal combustion engine counterpart, the 1.8L Civic AT, which had an ARAI certified mileage of 14.8kmpl. And all of this was achieved without compromising on driving performance.

There is no doubt that EVs are the future. But the jump from ICE and EV is too big, which not all of us can afford or are ready for. Here, hybrid systems are the answer buyers are looking for because they aren’t limited by EV infrastructure and range anxiety. Additionally, as compared to ICE vehicles, they have better fuel efficiency, which makes them more economical to run. All of this while doing their bit for the environment.