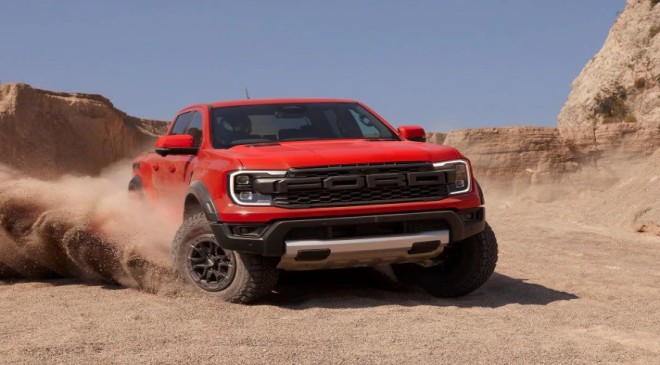 Not only does it get plenty of hardware updates, Ford has also plonked in a new 3-litre twin-turbo mill this time around

Okay, Ford is now not manufacturing cars in India and would only import premium cars in the country like the Mustang. But that doesn’t stop us from loving the Ranger, and there is a new one in town, and it is the Raptor. The Ford Ranger has a lot of relevance in India, as it always used to give us a preview of what the Endeavour would look like.

A Ford wearing a Raptor badge means it’s the real deal. So it gets hotter looks, some serious hardware upgrades for better off-roading, and most importantly, more power: a new 288PS/491Nm 3-litre twin-turbo V6. But for those with a heavy usage, the 2-litre biturbo diesel will be offered from 2023 onwards in select countries.

Back to the petrol motor, though. With so much power on tap, it can be best enjoyed with an aural sound track, and the Ranger Raptor has that part covered with an active exhaust with four sound modes: Quiet, Normal, Sport, and Baja. The last one is the hardcore one and claims to provide the best aural experience.

Now, to the hardware upgrades. The Ranger Raptor gets a new Fox suspension system that can prevent bottoming out while serious off-roading. And in case you do bottom out, plenty of underbody protection ensures all your vital components are safe. There is an electronically activated two-speed transfer case and electronically locking front and rear differentials.

It’s not only hardware upgrades that aid off-roading, but plenty of software-based kit as well. A few ones to name include off-road modes (Rock crawl, Sand, Mud/Ruts, and Baja), on-road modes (Normal, Sport, Slippery), and the usual stuff like electronic stability control, hill descent control, and Trail Control (basically cruise control till 32kmph).

The Raptor also looks seriously hawt, especially in this orange shade. The familiar but bold Raptor-specific grille with the big FORD lettering is present, while the bumpers have been beefed up. Chunky off-road specific tyres and body cladding gives it a daring stance. And last but not least, the tailgate features the Ranger name boldly engraved on it.

Inside, the Ranger Raptor gets the same Mach-E-like portrait-oriented touchscreen infotainment system. It also gets a beefier steering wheel with Raptor badging and plenty of red highlights to denote it’s the hardcore variant. Subtle, but surely, it does improve the sporty quotient.

The Ranger Raptor will go on sale imminently in Europe. And about Ford India, we hope the sporty pickup truck is part of the exotic lineup which the American carmaker has been planning for a while now. Fingers crossed.