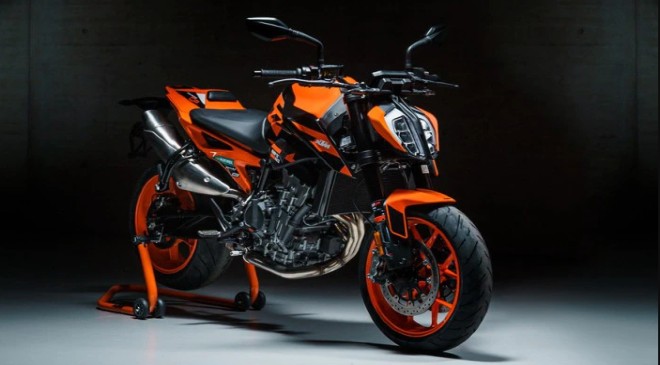 Sadly, the updates in this motorcycle are limited merely to cosmetics. It features a unique GP-inspired livery on the bodywork, complete with ‘KTM’ and ‘Ready To Race’ stickers on the fuel tank extensions, ‘Motorex’, ‘Pankl Racing Systems’, and ‘WP’ logos on the side panels, and sporty looking orange alloy wheels. Additionally, it also gets a pillion seat cover for an added dose of sportiness.

The motorcycle remains the same as the standard variant in terms of mechanicals. It continues to use the same 889cc parallel-twin liquid-cooled heart, churning out 115.5PS and 92Nm. The engine is reined in by three riding modes linked to the multi-level, switchable cornering traction control, engine braking control with slipper clutch, and cornering ABS with supermoto mode.

KTM also offers a range of official accessories to spruce up the Duke GP, including an Akrapovic full system exhaust for extra performance. The bike will arrive in global dealerships from March. The 2022 iteration will probably be the last hurrah for the 890 Duke range as KTM is already working on its successor, the 990 Duke. In fact, the bike was already spotted testing in January this year.

While the Duke GP certainly looks sportier than the standard variant, we wish KTM had equipped the bike with a few carbon-fibre bits on the bodywork to justify the GP theme. Let us know what you think in the comments.