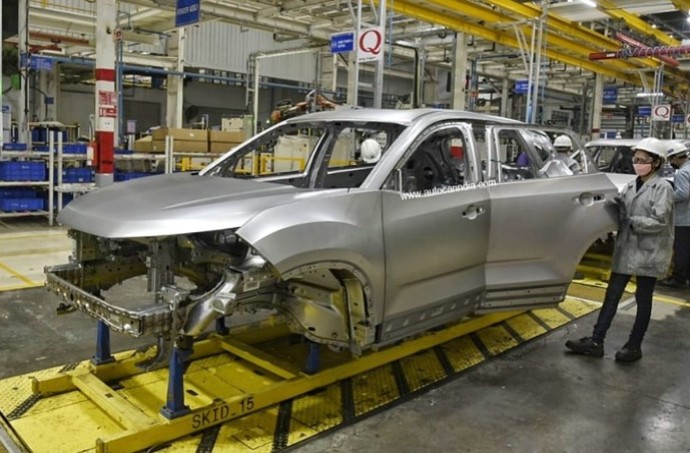 It is the dawn of a brand-new financial year for India. Automotive sales-wise, it has not been a particularly noteworthy fiscal for most players. From passenger vehicles to commercial operators, none of the segments are completely out of the woods. However, in terms of stock market performance, it’s been a rather smooth ride for the auto stocks this financial year. The BSE Auto Index closed trade on March 31, 2021 at 22,252.21, up over 107 percent from April 1, 2020.

In the last quarter of FY2021, passenger vehicles and two-wheeler stocks were among the top gainers, with nearly 62 percent gains in Tata Motors, 12.44 percent gains in Mahindra and Mahindra. However, Maruti Suzuki has been an underperformer – down 8 percent – in the same period. In the two-wheeler space, TVS Motor jumped 18 percent while Bajaj Auto and Eicher Motors have gained 7 percent in the last quarter of FY2021.

In individual stock action, Tata Motors is literally one of the shining stars on Dalal Street, with a whopping 300 percent plus gains in this fiscal. The stock market performance matches the bellwether auto stock’s retail performance too. Its passenger vehicles business has scripted a remarkable turnaround with sales soaring to an eight-year high.

The stock market underperformance in the last quarter of FY2021 has not dented Maruti Suzuki’s market share. The market leader in the passenger vehicles segment has also maintained leadership position in the utility vehicles segment, with 2,02,927 units sold between April 2020 and February 2021 and a 22.47 percent market share. What is creditable is that despite exiting the diesel engine market in the past year, the company is just 9.16 percent behind its year-ago sales of 2,23,394 units. Over the last one year, Maruti Suzuki stock has yielded nearly 60 percent return, and is 18.34 percent away from its 52-week high of Rs 8,329/share.

In the two-wheeler space, Royal Enfield is no doubt making waves with the Meteor 350 bagging our 2021 Bike of the Year award. While the Meteor is among the top 10 selling bikes in India, the bike maker clocked a 6 percent growth in February sales on a year-on-year basis and the stock of the parent company, Eicher Motors is buzzing on D-street. It is up almost 100 percent in this fiscal and is just 14.26 percent away from its 52-week high of Rs 3,037/share. Not just the auto sector but overall, it’s been one of the outperforming stocks.

The other big buzzer amongst the two-wheelers, TVS Motor has recorded over 130 percent gains in FY2021 backed by strong fundamentals and nearly 7 percent compounded annual growth in its net profit in the last three years. Its two-wheeler exports clocked 1,00,000 units in March 2021. This fiscal also marked TVS Motor’s takeover of 123-year old British bike brand, Norton. Norton is currently finalising the construction of its new factory in Solihull and is expected to open by the second quarter of this calendar year.

Hero MotoCorp continued to maintain its lead as the market leader in bikes and scooters and spread the cheer in the stock market. The stock is up close to 83 percent in what’s been a rather busy fiscal for the bike maker. It not just crossed the 100 million cumulative production milestone, but also rejigged its leadership team and  finalised its partnership with Harley-Davidson in the past twelve months. The stock is 19.71 percent away from 52-week high of Rs 3,629.05/share.

Bajaj Auto too clocked 80 percent plus gains in the stock market in FY2021. This mid-range momentum stock is about 15 percent away from its 52-week high of Rs 4,361.40/share while the Bajaj Pulsar remains amongst the five most selling bikes in India. Though, the shortage of semiconductors has affected Bajaj Auto, the company has clocked total sales of 19,79,936 two-wheelers in the domestic market (-18 percent) and exported 17,56,656 units (-6 percent) in the first 11 months of this Covid-impacted fiscal.

Overall, it’s been a buzzing one year for the auto stocks on Dalal Street. A lot of the price action has been on the back of gradually improving fundamental triggers. All eyes on how the new financial year, FY2022 pans out. Especially with the renewed surge in number of people affected by COVID-19 and some restrictions in select auto hubs and the continuing supply chain bottlenecks, it’s surely wait and watch for now.