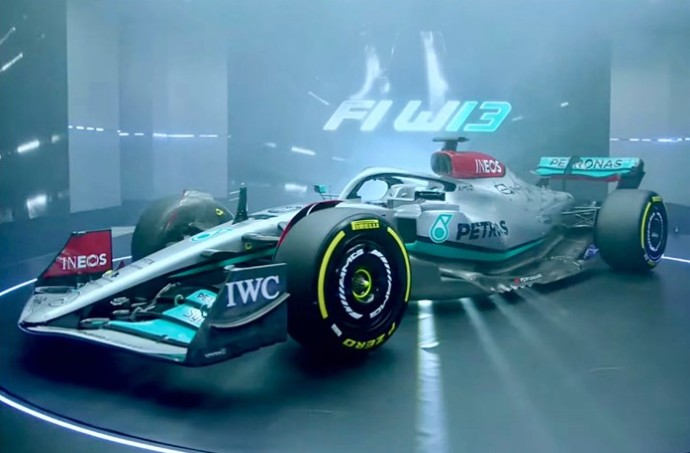 Speaking at the launch, Lewis Hamilton also reaffirmed his commitment to F1.

Mercedes has taken the covers off its F1 2022 contender that will be piloted by Lewis Hamilton and George Russell. With the W13 E-Performance, the Silver Arrows team returns to its traditional silver livery.

F1 has introduced sweeping design changes this year in order to make overtaking easier. The most prominent of these changes are the reintroduction of ground effects, more simplified front wings, bigger rear wings and larger 18-inch tyres. Additionally, F1 has also made some changes to the sprint race format, with more points up for grabs.

The most evident change on the W13 is Mercedes’ return to its traditional silver livery. The team had raced with a black scheme in the past two seasons to promote diversity.

Recent reveals by the likes of McLaren, Aston Martin and Ferrari have shown that teams are already adopting different interpretations of these new rules. And the W13 has some unique titbits too, with a wavy floor edge, sloped sidepod, long nose and a double dip in the rear wing. Of course, as is the case with all teams, we won’t be seeing the final car design till the season gets underway in Bahrain. The team also claims that “more parts have been changed for the 2022 power unit, than on any previous iterations, since the introduction of the V6 Turbos in 2014”.

Despite Lewis Hamilton losing the drivers’ championship title to Max Verstappen, Mercedes did secure a record eighth straight constructors’ title last year. And the team will be hoping to continue that title streak along with reclaiming the drivers’ title.

Mercedes emerged on top the last time significant rule changes were introduced. Despite the rule changes essentially wiping the slate clean, the team still enters 2022 as the clear title favourites.

“We did pretty well during the last big regulatory change into the hybrid era and performed well when we went from the narrow to the wide cars in 2017,” said team principal Toto Wolff. “While we have a good track record, my message is clear: we can’t rely on past success for this year’s performance, but we can rely on our people, our culture, our structure, and our mindset to do the best possible job for 2022.”

Lewis Hamilton: I never said I was going to stop racing

Much of the winter break headlines surrounded concerns over Hamilton’s future in F1. After losing the title to Verstappen at the controversial Abu Dhabi GP finale, the Briton remained out of the public eye and went on a social media hiatus.

Speaking at the launch, Hamilton reaffirmed his commitment to Mercedes and F1: “I never ever said I was going to stop. I love doing what I do. It was a difficult time for me and it was a time where I really needed to take a step back, focus on being present. Eventually, it got to a point where I decided that I’m going to be attacking again coming into another season.”

After analysing last year’s Abu Dhabi title decider, the FIA decided to replace Race Director Michael Masi and has introduced a series of changes in how the races are policed. Commenting on this, Wolff said, “It’s very encouraging to see action has been taken. There’s a much more robust structure now and a support structure now for the race director. The right steps.”

Hamilton, who is starting his tenth season with Mercedes, will also have the added challenge of an all-new teammate this year, with Russell replacing Valtteri Bottas. Wolff believes fans will see some healthy competition between the two this year.

“Lewis is the best driver in the world, and he is joined by one of the brightest and most promising of their generation in George. I have no doubt that we can create an environment of partnership between the two, of productivity to develop this new car, which will be essential, whilst maintaining a healthy competition that will motivate them and the wider team,” he said.

F1 pre-season testing kicks off at the Circuit de Barcelona-Catalunya on February 23.