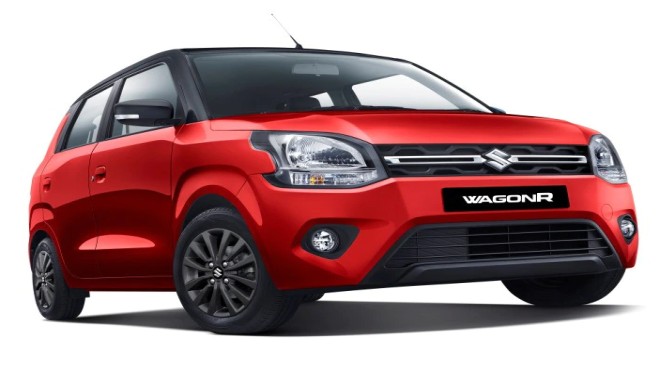 It gets major changes under the bonnet with new, more efficient DualJet engines from Celerio and Swift

On the outside, the changes are minimal, but the Wagon gets a new set of 15-inch alloy wheels.  Top-spec ZXI+ models are now offered with two dual-tone roof options, Galant Red and Magma Grey, each with a contrast black roof. The dual-tone variants cost an additional Rs 12,000.

Inside, the Wagon R’s dual-tone interiors are largely similar to the outgoing model, but the new car gets a ‘dark grey melange’ seat fabric. It is equipped with a 7-inch SmartPlay Studio touchscreen infotainment system paired with four speakers (two additional speakers than before).

Base and mid-spec variants of the new Wagon R are powered by the new 1-litre petrol DualJet engine from the Celerio that makes 67PS and 89Nm. It has an impressive claimed fuel economy of 25.19kmpl (24.35kmpl in the manual), 16 percent better than the outgoing 1-litre Wagon R. You can get this engine with factory-fitted CNG in the S-CNG variants. Maruti claims a fuel economy of 34.05km per kg for the Wagon R S-CNG.

The new Wagon R doesn’t get the major safety updates that we’ve seen in the new Baleno, but it does add a hill-hold feature in the AMT-equipped variants. Other safety equipment includes dual front airbags, ABS with EBD, and rear parking sensors.

Maruti is offering the Wagon R with new subscription plans, too, starting at a relatively affordable Rs 12,300 per month price. The hatchback rivals the Hyundai Santro, Tata Tiago, and Maruti Celerio.