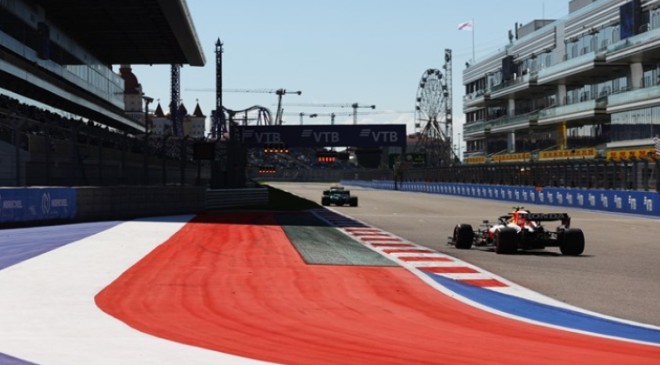 The 2022 Russian GP was scheduled to be held in September, but F1, the FIA and all teams have decided to cancel the event.

F1 has confirmed that the 2022 Russian GP will not go ahead as planned in the wake of Russia’s invasion of Ukraine.

“The FIA Formula 1 World Championship visits countries all over the world with a positive vision to unite people, bringing nations together,” an official statement read. “We are watching the developments in Ukraine with sadness and shock, and hope for a swift and peaceful resolution to the present situation. On Thursday evening, Formula 1, the FIA, and the teams discussed the position of our sport, and the conclusion is – including the view of all relevant stakeholders – that it is impossible to hold the Russian Grand Prix in the current circumstances.”

Speaking at a press conference on Thursday, several F1 drivers voiced their unease over the Russian GP being part of the 2022 calendar. Four-time F1 world champion Sebastian Vettel even went ahead and stated that he would not race at Russia if the race went ahead. “For myself, my own opinion is I should not go, I will not go,” Vettel said. “It’s wrong to race in the country. I’m sorry for the people, innocent people who are losing their lives, getting killed for stupid reasons. A very strange and mad leadership.”

Reigning world champion Max Verstappen echoed Vettel, adding that “When a country is at war it’s not right to race there, for sure.”

The 2022 Russian GP was scheduled to take place on September 23-25. This was due to be the final F1 race in Sochi before the event is moved to a new venue near St Petersburg in the future. F1 isn’t the only sport sanctioning Russia; the country has also been stripped off hosting the UEFA Champions League final, being replaced by Paris.

The Haas F1 team’s primary sponsor is Russian company Uralkali, owned partly by driver Nikita Mazepin’s father. Its cars have been sporting the blue, white and red colours of the Russian flag as a result of the partnership. However, the team has elected to run an all-white livery for the final day of pre-season testing at the Circuit de Barcelona-Catalunya, dropping all branding from Uralkali.