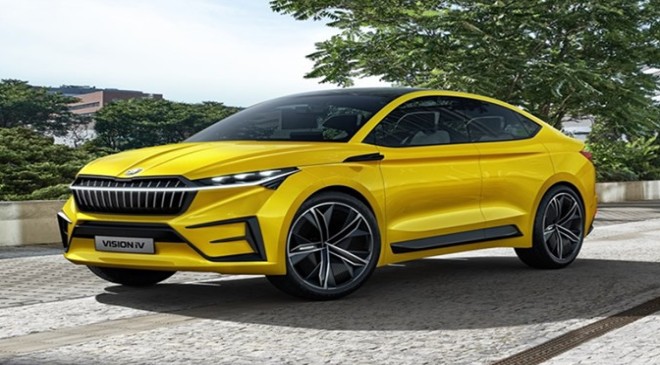 New models expected to include a smaller sedan and a replacement for the Citigo e-iV hatchback.

Skoda boss Thomas Schäfer has confirmed that its next three electric cars will be smaller than the Enyaq SUV and Enyaq Coupé, but has said the firm wouldn’t rule out launching larger EVs in the future.

The new Enyaq Coupé iV is Skoda’s second model built on the Volkswagen Group’s versatile, bespoke electric MEB platform. As previously reported, the firm’s next priorities include a smaller sedan-style car – likely to be similar in size to the Volkswagen ID 3 – and its first model on the compact MEB Entry platform, which would essentially serve to replace the Citigo e-iV that went out of production in 2020.

Last year, the Volkswagen ID Life and Cupra Urban Rebel concept previewed the first cars from those respective brands that use the new, smaller MEB platform, previewing production models due to arrive in 2025.

Asked when Skoda would showcase a model using that platform, Schäfer told our sister publication Autocar UK, “Our colleagues from Seat, Cupra and Volkswagen are pushing ahead a little stronger on that side. Within the group we are balancing this a bit.

“We’re coming shortly with an announcement on this one, but rest assured, it will be differentiated from our sister brands and a beautiful concept that really fits Skoda.”

Larger EVs positioned above Enyaq likely at a later stage

While the immediate priority is on filling the electric line-up below the Enyaq, Schäfer did not rule out eventually adding a larger, 7-seat SUV or an MPV similar to the forthcoming ID Buzz.

He said: “Never say never. It’s one step at a time – but we’ve promised that the three models below the Enyaq are the priority for now.”

The Czech firm is aiming for 50-70 percent of its Europe sales to be pure-electric cars by 2030, with plans for a major expansion.

Shifting focus to the Indian market, Skoda is currently fresh off the Kodiaq SUV facelift’s launch early last month. The carmaker is also gearing towards the launch of its new midsize sedan, the Slavia, which is expected to launch in March. The carmaker has plans to launch six new models in India in 2022, including the aforementioned SUV and sedan. On the electric vehicle front, the carmaker is considering bringing the all-electric Enyaq iV SUV to India.