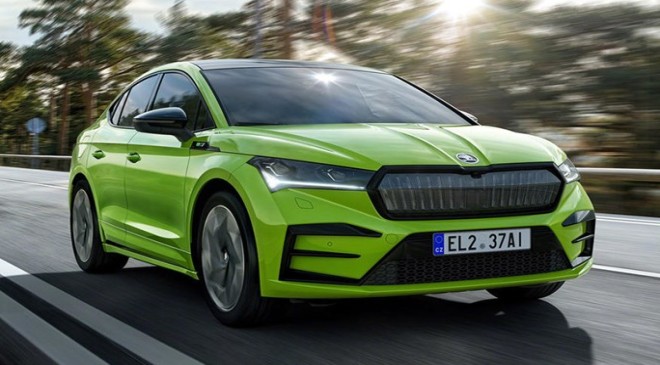 The Enyaq Coupe is the fourth series-production Skoda globally to gain a vRS version, following the Octavia, Fabia and Kodiaq.

Skoda has taken the wraps off the new Enyaq Coupe iV with a flagship vRS variant. It is the first electric model from the Czech firm to gain a hot vRS performance version. In essence, the Enyaq Coupe vRS is closely related to the Volkswagen ID.5 GTX that was unveiled in November last year.

The Enyaq Coupe vRS uses a twin electric motor setup – one on each axle – to offer a total output of 299hp and 460Nm of peak torque. That’s good for a 0-100kph sprint in 6.5 seconds and a top-speed of 180kph. In comparison, the top-speed on the standard versions are capped at 160kph.

It comes exclusively with an 82kWh (77kWh net) battery pack, the largest unit offered with the VW Group’s MEB architecture. Skoda has not yet confirmed its maximum range, but the identically powered and similarly shaped Volkswagen ID.5 GTX manages 476km per charge.

The vRS model features a sportier suspension set-up – also offered on Sportline trim models – that is lower by 15mm at the front and 10mm at the rear.

The Enyaq Coupe vRS sits on 20-inch wheels (21-inch versions are optional) and sports a gloss black vRS grille surround and rear diffuser as well as vRS badging. As standard, the vRS also features Skoda’s ‘Crystal Face’ grille, which lights up using 131 LEDs, and a full-width red reflector strip at the rear, in keeping with existing vRS models. Pictured above is the Enyaq Coupe vRS in a new optionally painted shade of Hyper Green.

Inside, the vRS model can be specified with a bespoke Design Selection package, which brings black perforated leather seats with grey piping and contrasting stitching, a leather-style dashboard, carbon fibre-effect trim elements and vRS-badged sports seats.

Otherwise, it follows the standard Coupe and full-sized SUV in receiving a 5.3-inch digital display and 13-inch central touchscreen. All Coupe models get a two-spoke, heated, multi-function steering wheel and are equipped with paddles for adjusting the level of energy recuperation under deceleration. Also standard for the vRS is a tri-zone climate control system.

Skoda recently launched the facelifted version of the Kodiaq three-row SUV. The Czech carmaker is also gearing up for the launch of the all-new Slavia sedan, with price announcement due in March. It will be the second Skoda model to be based on the localised MQB-A0-In platform. As for Skoda’s electric vehicles, the carmaker is expected to bring the Enyaq iV SUV to India sometime next year via the CKD (completely knocked down) route.