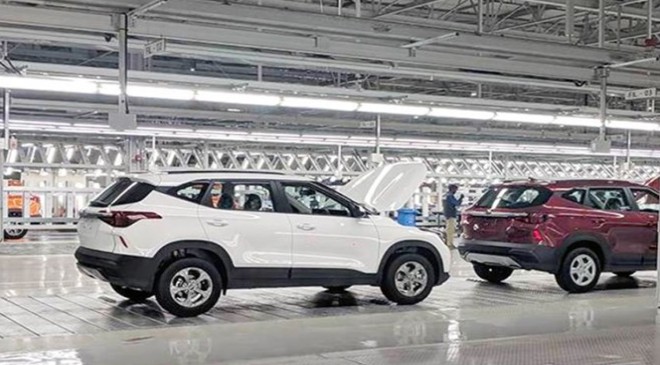 Kia has announced that it has added a third shift at its Anantapur plant bumping up the carmaker’s total production capacity to three lakh units per annum. The move should enable Kia to keep the waiting periods for its popular models – the Seltos, Sonet and the recently launched Carens – in check.

The announcement is in line with a previous statement to Autocar India by the  VP and head of sales at Kia India, Hardeep Singh Brar, which said that the carmaker would be starting a third shift by March.

“We have hired additional manpower and aligned resources to minimise the waiting period on Kia cars and help us cater to the high demand in domestic and international markets, ” said Tae-Jin Park, managing director and CEO, Kia India. “India is a strategic market for Kia globally and all our products have received an overwhelming response here. As a committed carmaker, it is our duty to ensure faster deliveries to our customers and the beginning of third shift will ensure just that.”

Kia has seen strong demand for its mass market models, with long waiting periods for the Sonet and Seltos. The recently launched Carens has also started strong, with over 19,000 bookings having come in before the three-row model’s launch.

The increased capacity should have some effect on the waiting periods with the 3 lakh unit annual production capacity being split between domestic and export markets. Kia also revealed that it has completed five lakh dispatches from its Anantapur facility since it commenced production in August 2019. Of these, four lakh units were for the Indian market with the rest being exported.

Aside from its conventional models, Kia and Hyundai are both focused on launching some of its all-electric models in India with as many as three models expected from each brand. The cars expected to arrive will include global models such as the e-GMP-underpinned Kia EV6, Hyundai Ioniq 5, Hyundai Kona Electric facelift and made-for-India EVs in the coming years.