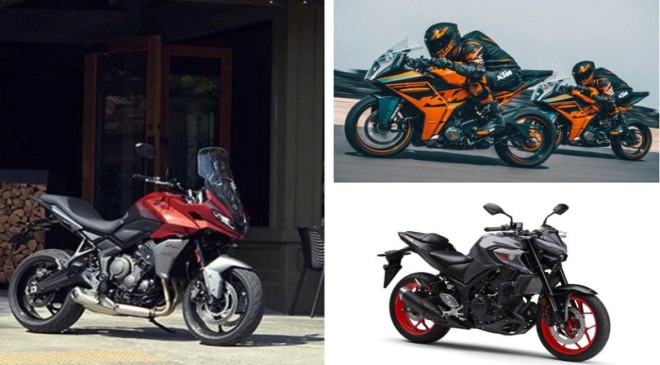 From e-scooters to tourers and supersports, there’s a lot of action happening this month

February wasn’t as exciting when it came to two-wheeler launches, but that’s about to change this month. Here’s what heading our way in March 2022:

We have seen a bunch of spy shots, and more recently, the leaked brochure. We’d finally received a ‘Block Your Date’ invite for the media ride, so the more affordable and usable sibling of the Royal Enfield Himalayan is bound to arrive in the first half of the month. The Royal Enfield Scram 411 is already arriving at dealer yards, and here’s a closer look at the swanky retro colours it’ll come in.

The new-gen RC 125 and RC 200 are already here and it is about time that the most powerful KTM supersport in India arrives in its new avatar as well. The updated chassis, lighter wheels and braking components and other updates translated to a great experience with the RC 200, and we expect the same from the 2022 RC 390.

This is going to be one of the most important launches of the year, as the Indian two-wheeler giant steps into the EV market. Hero has already announced its collaboration with Bharat Petroleum for two-wheeler charging stations, and given that the brand has already committed to a March 2022 launch, we can expect this to come in the second half of the month.

An electric scooter is not likely to be the only product on Hero MotoCorp’s agenda. The Indian bikemaker is expected to introduce the XPulse 200 4V outfitted with the Rally Kit straight from the factory. With the adjustable long-travel suspension, knobby tyres, handlebar risers, rally-style flat seat and a longer gear shifter pedal, expect this to be a hardcore off-roader.

First, it was the leaked type-approval documents, and later a massive drop in the sales and production of the MT-15. The Japanese naked is set to get the same set of updates from the R15 V4 like the USD fork and Bluetooth connectivity. We reckon Yamaha will make some aesthetic changes to the bike too.

With Bajaj, TVS and now Hero stepping into the EV business, even Suzuki has joined the bandwagon. And we have already seen the scooter being tested, in the gloss white paint scheme with the blue accents. Suzuki has equipped the Burgman Electric with a hub motor and its performance is expected to be on par with the likes of the TVS iQube Electric and the Bajaj Chetak.

The Triumph Trident 660 turned out to be a success for the British manufacturer in India and it had stated that its touring-friendly sibling will grace Indian shores in the first quarter of 2022. The Tiger Sport 660 uses the same in-line triple motor from the Trident and makes 81PS and 64Nm. But with the new fairing, the Tiger Sport should fare better on the highway.

Another electric heading our way this month is the Okinawa Okhi90. The spy shots of the e-scooter have already revealed quite a lot about the new scooter, and in all likelihood will be the Indian company’s flagship product. Expect this to be priced competitively to take on the Ola S1 and Ather 450X.