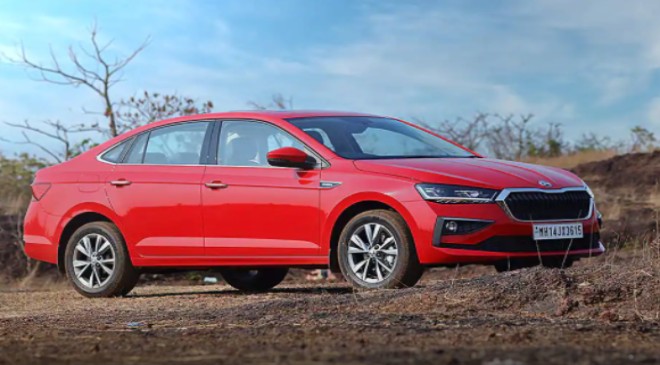 The Skoda Slavia marks the company’s return in the compact sedan space. While the segment hasn’t seen much movement, the Slavia promises to stir things around. But does it have what it takes? We drive to find out

With SUVs becoming a formidable force to reckon with when Skoda Auto India announced plans to bring in a sedan, especially after the success of the Kushaq, we had to pause and make sense of this strategy. But it’s a simple one. Sales of the Rapid saw a big hike when new variants of the car were launched at an affordable price point but we know for a fact that the replacement will not be as affordable.

There was a massive gap then that needed to be plugged… with the Octavia now leaning towards the premium side, and the baton has been handed over to the Slavia.

The Slavia is now, what the Octavia was more than two decades ago in India, and it looks the part too. We’ve called it the baby Octy and it very much is. Each aspect right from the crystalline elements that you see on the headlamps to the butterfly grille and the face itself all make the comparison to the Octavia even more evident. But then you have the L-shaped DRLs which give the Slavia a unique look and these 16-inch wheels available across variants give it a great stance. The sloping roofline too adds to the overall look of the sedan and once you love to the rear and you’ll see the C-shaped LED tail lamps and of course, there’s the Skoda badging on the boot lid. And I have to say it really looks sleek and sexy dressed in this Tornado red colour. There’s a lot to say on the dimensions front as well.

The Skoda Slavia is wider, taller, and has a longer wheelbase as well compared to its rivals.
Photo Credit: Pawan Dagia

So as you can see, on paper, the Slavia is wider, taller, and has a longer wheelbase as well compared to its rivals.

But does this translate into more room in the cabin?

It does and there’s a good amount of head and shoulder room up front and ergonomically speaking, everything is close at hand, the seat is also comfortable offers good lumbar support, and is snug too. And these are of course ventilated as well which we love. Now at the centre of it all is this 10-inch touchscreen system, which provides all the information you need, in fact, and gets wireless Apple CarPlay, Android Auto connectivity but that’s only in the top trim. The lower variants will get a 7-inch touchscreen system. There’s also the digital instrument cluster that you get which is an eight-inch unit and you have options for layouts too, of course, there’s also the sunroof, and connected car tech, so Skoda has covered all bases.

Thanks to the long wheelbase, there’s enough room at the rear too. I was very comfortable at the back thanks to the 2651 mm of wheelbase and there was good enough knee and headroom. There’s a rear ac vent and 2 Ctype chargers for the convenience of the customers. Now, there’s good shoulder and headroom here and the larger glass area also adds to the roominess of the cabin. What’s also good here is that the middle seat gets a three-point seatbelt and that earns the Slavia a big thumbs up.

There’s more than enough space in the boot; 521 litres of it and if you drop down the rear seats then, there are 1050 litres on offer and that’s huge.