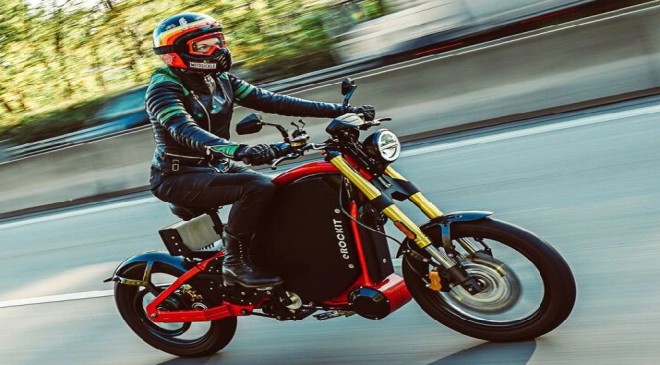 eRockit is a German startup that has been garnering attention globally with its quirky but impressive electric contraption, the Limited Edition 100. This EV, priced at EUR 11,850  (roughly Rs 10 lakh), is not just expensive but also claims to be the fastest pedal-powered electric two-wheeler on sale.

There’s no denying that the eRockit Limited Edition 100 is a head-turner. Look at it from the front, and you might mistake it for a motorcycle, thanks to the headlight, mirrors, and the golden USD fork. Move to the side, and you’ll realise how wrong you were. The aluminium frame is closer to a cycle than to a motorcycle, and within the structure, eRockit has housed the battery pack, while the controller sits at the bottom of the frame.

Unlike most e-bikes, this doesn’t have a hub motor, but a centre-mounted 16kW PMSM unit with a continuous output of 5kW. This is paired with a 52V 6.6kWh lithium-ion battery – which can be charged in five hours – with a claimed range of 120km.

Interestingly, unlike most e-bikes or electric motorcycles, eRockit doesn’t get a throttle but only uses pedal assistance. And despite that, the startup claims that this EV can achieve a top speed of 89kmph.

The Limited Edition 100 comes with equally capable hardware to back that performance. An adjustable 37mm USD fork with a preload-adjustable monoshock takes up suspension duties. For braking, there’s a 300mm disc with a four-piston radial calliper (front) and a 220mm disc with a two-piston calliper.

The eRockit Limited Edition 100 is currently on sale in Germany. Last year, the company revealed its plans to expand to India but has yet to make any further announcement. While this is a unique offering, we have seen something like this in our EV space from Polarity e-bikes. That said, we’ve yet to spot one on the roads.