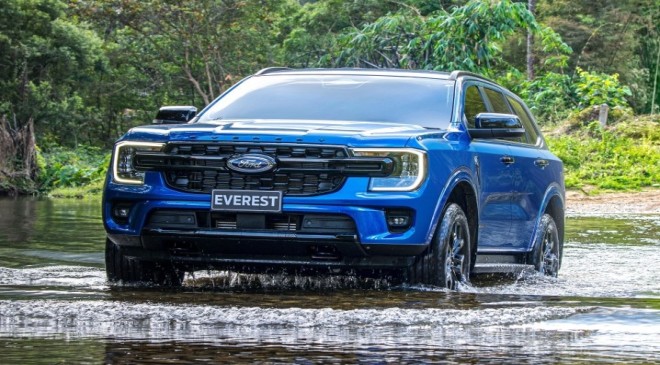 Ford has unveiled the next-generation Everest SUV for global markets. It shares underpinnings with the new Ford Ranger pickup truck and replaces the second-gen global SUV we knew as the Endeavour in India. Its specs and features will vary for different countries, but here are the major changes that the new third-generation SUV brings.

On the outside, the new Everest bears little resemblance to its predecessor. At the front, it has an imposing, flat nose with large headlamps and a high-set bonnet. Its roof rack is rated to carry up to 100kg while on the move, but the static load rating is 350kg, so you can even put a roof tent on it while the SUV is parked.

Inside, the SUV has an all-new interior and dashboard with a 12-inch portrait-style touch screen with Sync 4. The Everest will come with an 8-inch digital instrument panel, and select variants and markets will get an even larger 12.4-inch driver’s display. It’ll be available with up to seven seats that will be electrically powered on higher-end variants. The SUV is also equipped with a powered tailgate and under-floor storage in the boot area.

The Endeavour also gets a new e-shifter for the automatic transmission. Ford plans to offer multiple diesel powertrains at launch: 3-litre V6, 2-litre single turbo and 2-litre bi-turbo engines. In 2023, the carmaker will introduce a new 2.3-litre EcoBoost turbo petrol engine to the Everest lineup in select markets. The engines will be paired with either a standard 6-speed automatic gearbox or Ford’s SelecShift 10-speed automatic transmission.

You’ll also get two 4×4 options – a part-time system with a shift-on-the-fly transfer case, and a permanent 4WD system with an electronically controlled transfer case with multiple drive modes. The SUV is rated to tow up to 3,500kg, and it can wade in up to 800mm of water (150mm more than the Mahindra Thar, for reference).

The new Everest gets more safety features than the previous Endeavour sold in India. It adds knee airbags for both front passengers, with a total of nine airbags on offer. It’ll also get matrix LED headlamps, a 360-degree camera, auto emergency braking, blind spot assist with trailer coverage, lane-keeping assist, and parking assist. The SUV will also be equipped with an evasive steering assist system to help the driver avoid a collision, and reverse brake assist that prevents collisions while reversing.

The new Ford Everest SUV is expected to go on sale in other countries later this year, but it’s unlikely to be offered in India, considering Ford pulled the plug on production and sales of its India lineup that included the Endeavour. It’ll rival the Toyota Fortuner and Isuzu MU-X overseas.