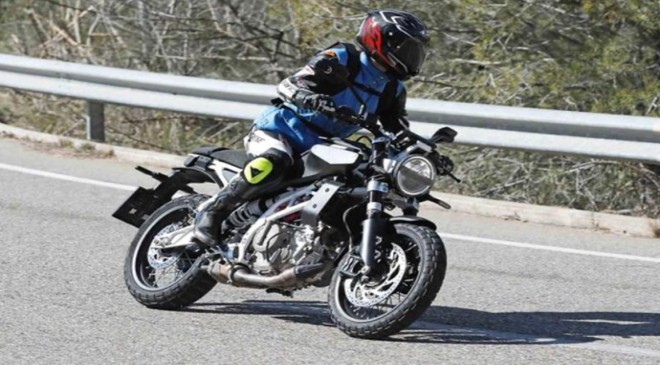 The upcoming Husqvarna Vitpilen 401 and the Svartpilen 401 are based on the KTM 390 Duke platform.

The Husqvarna Svartpilen, one part of the next-gen 401 twins, has recently been spotted testing. The upcoming Vitpilen 401 and the Svartpilen 401 are based on the KTM 390 Duke platform.

The Svartpilen 401 will get a redesigned fuel tank and a new rectangular screen, likely to be a TFT similar to the KTM 390 Duke. The eagle-eyed among you will also notice that the engine mount points and the trellis frame are different from the current-gen model. Moreover, the test mule gets a new design for its braced cast alloy swingarm.

The Svartpilen’s engine casings are slightly different when compared to the current model. The test bike sported different exhaust routing, complete with a stubby catcon at the end. The current KTM 390 Duke-derived 373cc single-cylinder liquid-cooled powerplant already makes a healthy 43.5hp and 37Nm and we expect only minor tweaks. It is likely to not get a significant bump in power, so it continues to meet A2 license restrictions.

Upfront is a WP Apex USD fork which could also possibly be adjustable, and an offset rear monoshock. We saw a test mule last year that had the front brake disc placed on the left and not on the right like this one. So it seems like Husqvarna is still tinkering with the packaging of this motorcycle. The wire-spoked wheels appear to be shod in Pirelli Scorpion Rally STR rubber at both ends.

The KTM DNA underneath the 401s’ distinctly modern Swedish garb is unmistakable and  Husqvarna should definitely launch the twins in our market since the very bike it is based on is well received here. With the addition of the TFT display and other updates, the Husqvarna 401 would offer a new and distinct visual to the rider who prefers the subtle palette of the Husqvarna over the loud orange of KTM.

Considering how close to finished the Husqvarna Svartpilen 401 looks, we expect it to be officially unveiled late this year or early next year.

Do you think the Husqvarna 401s should be launched in India? Let us know in the comments below.