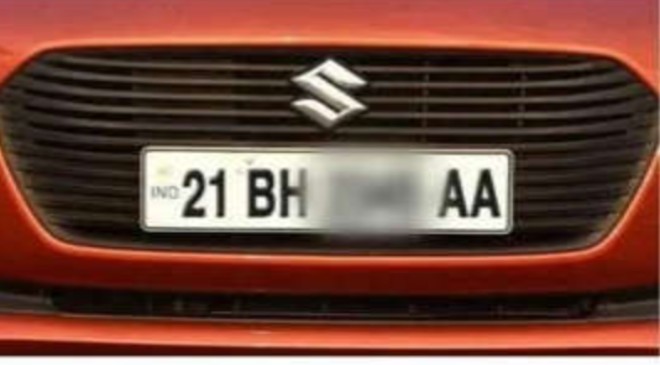 We are all too used to judging vehicles by their number plates. MH on a licence plate stands for Maharashtra, DL is Delhi, HR is Haryana, and so on.

But what about cars with the BH plate? The initials stand for Bharat.

The Bharat series number plates have been introduced by the Ministry of Road Transport and  Highways on 28 August, 2021, to ease the mobility of vehicles.  The registrations began from 15 September, 2021.

Under Section 47 of the Motor Vehicles Act, 1988, a vehicle registered in a particular state can be driven in another one only for 12 months. After that, the registration must be changed to that of the new state.

This proves cumbersome for vehicle owners with transferable jobs or those moving states.

The road and transport ministry aims to change that with the introduction of the BH series plates, which is a part of its citizen-centric initiative. Here’s how it will help vehicle owners:

The benefits of the BH series

A BH series plate is valid throughout the country. A vehicle owner does not need to apply for new registration when shifting from one state to another. This saves people a lot of paperwork and time.

For personal vehicles registered under the new BH series, the motor vehicle tax is levied for two years or in multiples of two, i.e, four, six, eight. For vehicles not under this series, owners need to shell out 15 to 20 years of tax, depending on the state where the automobile was purchased.

The tax for the BH series can be paid online and is applicable for 14 years. Post that, an annual payment is mandatory. For vehicles that cost less than Rs 10 lakh, eight per cent tax is applicable on the invoice. It’s 10 percent for vehicles priced between Rs 10 and Rs 20 lakh and 12 per cent for those about Rs 20 lakh.

Who can apply for a BH series number plate?

The BH series is not for everyone. A government or public sector unit employee, state or Centre, can apply for this special plate. A private sector employee with offices in more than four states or Union territories is also eligible.

Defence personnel, bank employees, employees of the administrative services, among others are likely to find the BH series plate useful.

How to apply for the BH series plate?

After state authorities verify the proof of eligibility, vehicle owners can log onto the road and transport ministry’s vahan portal. This can also be done with the help of automobile dealers while purchasing a vehicle. The dealer needs to fill Form 20 on the portal on behalf of the owner. Private sector employees need to fill Form 60 and provide an employment ID and work certificate.

A look at the BH series number

The format of this new series is YY BH #### XX. The YY is for the year of registration, BH is Bharat, followed by a computer-generated vehicle number (four numbers) and alphabets.

According to a report in The Times of India, Maharashtra issued its first BH number plate to a government staffer Mohit Sute, a resident of Mumbai’s Chembur in October 2021. He was handed over the plate by Satej Patil, minister of state for transport.

“It gives us immense pleasure to announce that today the first beneficiary of BH registration in Maharashtra, Mr Rohit Sute from Chembur, Mumbai received his #BHSeries vehicle. People in Maharashtra are getting their BH Series vehicle before Diwali,” Patil tweeted.