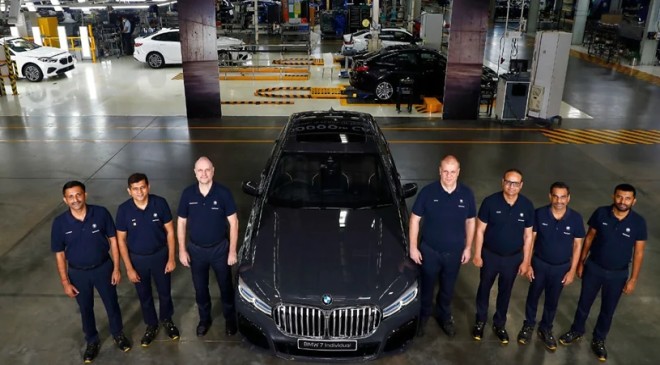 BMW’s 1,00,000th car to roll-out of the assembly line, at the Chennai plant, was the BMW Individual 740Li M Sport Edition. Currently, BMW assembles 13 models in India, and has managed to achieve up to 50 per cent localisation.

BMW Group India has rolled out its 1,00,000th locally produced vehicle from its manufacturing plant in Chennai, Tamil Nadu. The milestone car, a BMW Individual 740Li M Sport Edition, is one of the 13 models that BMW assembles in India. Apart from the 7 Series, other models that are locally produced here include – the 2 Series Gran Coupe, 3 Series, 3 Series Gran Limousine, M340i, 5 Series, and the 6 Series Gran Turismo. Among the SUVs, we have the BMW X1, X3, X4, X5, X7 and the MINI Countryman.

Commenting on the new milestone, Thomas Dose, Managing Director, BMW Group Plant Chennai said, “This accomplishment is a result of the team’s hard work, efficiency and consistency which ensures that every BMW or MINI car locally produced here in Chennai is of the same international quality standards as any other BMW plant across the world.” He further added, “Increased localisation of up to 50 per cent and a robust collaboration with local supplier partners has created more value for everyone in the ecosystem. BMW Group Plant Chennai looks forward to raising the bar in sustainable manufacturing excellence further as the India story grows.”

The most recent addition to BMW India’s line-up of locally produced cars was the 2022 X3 SUV. While the petrol model was introduced first in January 2022, the diesel trim followed suit in February. Currently, the total number of employees at the BMW Group India is over 650 people.