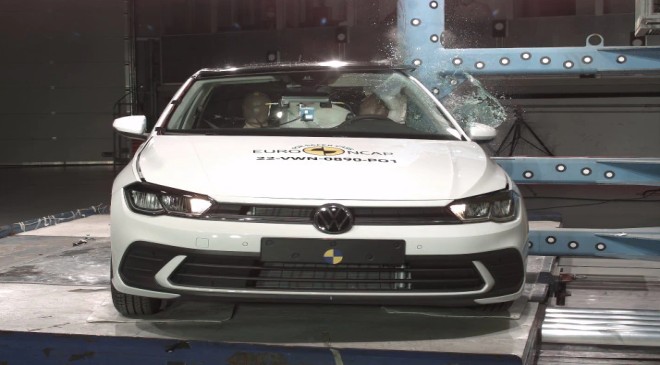 No less than five stars for Volkswagen’s premium hatchback, which is still under consideration for an Indian launch

The facelifted Volkswagen Polo has aced the Euro NCAP safety test with no less than five stars in its bag. Based on the MQB A0 platform, the Polo’s strong build and loads of safety tech were the main factors for a strong performance in the safety tests. The new Polo’s platform has been localised in India, and we hope the Volkswagen Group’s localised MQB-A0-IN offerings have similar safety standards as well.

But back to the Polo, the model used in this test was the 1.5-litre TSI Life trim, and was fitted with seven airbags (including a centre one), ISOFIX child seat mounts, autonomous emergency braking, and lane keeping assist. It scored 94 percent in Adult Occupant Protection (AOP), 80 percent in Child Occupant Protection (COP), and 70 percent in Vulnerable Users and Safety Assist features.

The Polo’s body shell was rated stable, and the knees and femurs of both the front occupants had good protection. Volkswagen was quick to add that people of different sizes and sitting in varying positions would be well secured as well. Even in the full-width rigid barrier test and side pole impact test, the Polo offered good protection for all critical areas of the front and rear occupants.

Global NCAP also appreciated the fact that Polo has countermeasures to protect injuries. For instance, the head restraints offered good protection for both front and rear occupants. The car also applies the brakes immediately after impact to avoid another collision. And lastly, it will call the emergency services in case of an unfortunate event.

In India, the existing Polo, based on the PQ25 platform, secured four stars in the Global NCAP safety tests. The Polo will bid farewell after a graceful 12-year run, and Ashish Gupta, Volkswagen’s brand director, has hinted the next-gen model could be launched next year.