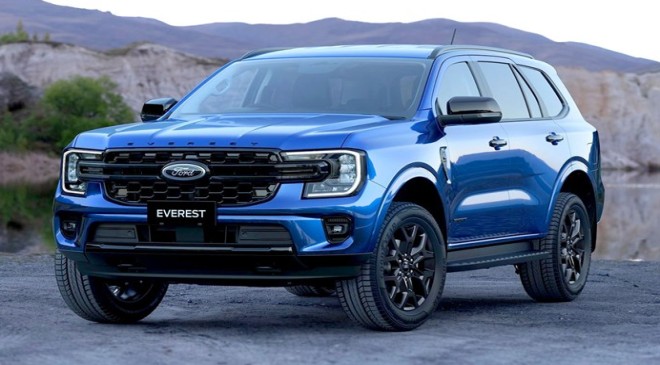 It has an all-new styling, updated tech and more. Here’s five fast facts about the Ford Everest.

Ford recently took the covers off the new Everest (previously sold as the Endeavour in India). Given that it has gone through a generational change, there is a lot that’s new with the Everest compared to its predecessor.

Here are all the key facts you should know about the Ford Everest.

1. It is larger than its predecessor

Under the skin, the new Everest shares its platform with the latest Ford Ranger pickup truck. As a result, the Everest has grown dimensionally – 50mm wider and has a 50mm longer wheelbase – over the previous-gen SUV. This should not only equate to a notable increase in the cabin space, but also make the SUV more sure-footed – both on and off road.

Design is an aspect that Ford has focused on to bring the new Everest in line with the new F150 and Ranger pickup trucks. This is most evident when looking at the front-end of the Everest that’s now more squared-off and features a large grille with a horizontal bar in the middle that extends out to the new Matrix LED headlights. The new C-shaped LED daytime running lights also give the Everest a distinct look.

When viewed from the side, the new Everest definitely has a boxier overall design than the model it replaces, along with a more pronounced shoulder line. The rear features a more upright tailgate with new LED tail-lights that are connected by a black plastic panel.

On the inside, the 2022 Everest not only features a new and more upright design, but it also comes packed with tech. Taking centre stage on the dashboard is a new portrait-oriented 12-inch infotainment touchscreen (lower trims get a 10.1-inch unit) that bundles in the FordPass connected car tech. The top-spec model also gets a configurable, 12.4-inch fully digital instrument cluster (8-inch on lower trims), ambient lighting, 10-way power adjustable driver’s seat, ventilated front seats, wireless charging, automatic climate control, a panoramic sunroof, power folding third-row seats and a powered tailgate.

However, that’s not all, as Ford has also made an effort to up the ante on the safety front. The fully kitted trim gets features like nine airbags (a first for the Everest range), adaptive cruise control with lane centring, hands-free parking, and autonomous emergency braking that can also detect imminent collisions with oncoming traffic.

4. Multiple diesel powertrains, with a petrol option on the way

Depending on the engine and trim level, the new Everest can be had with either a 6-speed manual or a 10-speed automatic gearbox. Lower trims get a rear-wheel drive layout, while a four-wheel drive layout comes standard on higher variants.

A 2.3-litre petrol engine is also slated to join the Everest’s line-up next year. Additionally, given that there is already a more powerful Ranger Raptor, as well as a Ranger electric version that’s been confirmed, the Everest range could also see similar additions down the line.

5. Unlikely to come to India in the near future

As Ford has wound down its manufacturing operations in India, the new Everest isn’t likely to be assembled in our market as the Endeavour, like the previous-gen model was. However, all hope is not lost as Ford still plans to continue offering CBU models like the Mustang and Mustang Mach-E SUV in India, hence leaving open the possibility for bringing the Everest as a full import.

Ford could also potentially restart manufacturing operations in India as an EV carmaker, having been granted approval under the government’s PLI scheme.