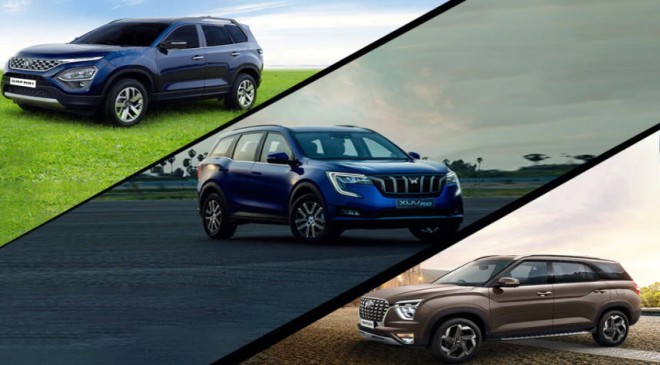 You know the drill, right? VBoxes strapped on, and we head to our test location to bring you the answers

It has been a while, but we are back with our familiar Zig performance and fuel efficiency comparo. This time around, we have three heavyweights from the three-row midsize SUV segment: the Mahindra XUV700, Tata Safari, and the Hyundai Alcazar. All three models are diesels and we have the automatic variants on test.

Which one comes on top? Read on to find out:

The XUV700, with its largest engine, displays the best power and torque numbers on paper. The Safari utilises Fiat’s familiar 170PS 2-litre diesel engine, while the Alcazar has the smallest engine here, and puts out the least amount of power and torque. In fact, the Alcazar falls short by 70PS and 200Nm when compared to the XUV700!

All models come with 6-speed manual and 6-speed automatic transmissions, and it’s the latter we have on test here. Which model comes on top in the performance test?

Read on to find out.

It’s no surprise that the Mahindra XUV700, with the best power and torque, won the performance test with the quickest 0-100kmph time. The Safari is almost three seconds slower than the Safari and comes second. But what caught our attention was the Alcazar. Even though it has the smallest engine, the Hyundai was just a whisker slower than the Tata.

Even during roll-on acceleration, the Mahindra smoked the Tata and Hyundai, which came second and third in this department.

The Surprising Bit, Though

You would think the XUV700, with the most powerful engine, would be the least fuel efficient, right? Well, you would be wrong.

But out on the highway, the tables are turned, with the Alcazar – as it has the least power – sipping the least amount of fuel, while the Safari and XUV700 came second and third respectively.

From the analysis of this report, we felt the Mahindra XUV700 offers a clear balance between performance and surprisingly, it’s rather fuel efficient for the power it puts out. And that’s why we feel it wins this test.