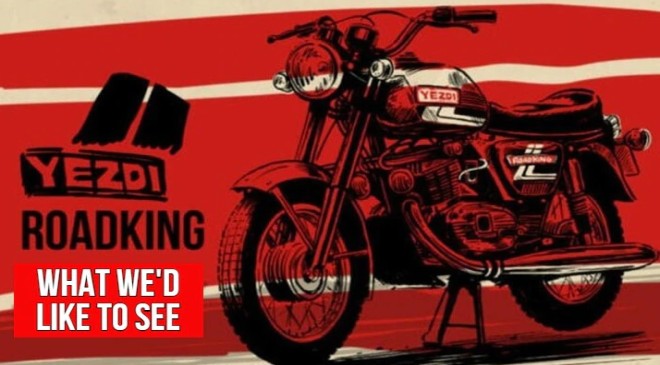 Yes, the iconic Roadking is making a comeback, that too with a bigger engine. Here’s how we think it should be

Yezdi has made a comeback with not one but three motorcycles: the Yezdi Adventure, Scrambler, and the Roadster. Though the iconic Roadking didn’t turn up this time, fret not for it will also turn up in a different avatar soon enough. Here’s what we’d like to see in the upcoming Yezdi:

The OG Yezdi Roadking looked delightfully retro thanks to its circular headlight, boxy fuel tank, simple side panels and single-piece bench seat. Yezdi will have to keep that Roadking’s genes alive, and hence we believe it would be good for the brand if it equipped the motorcycle with the same retro elements. In fact, we’ve already seen certain bits like the boxy fuel tank in the Yezdi Adventure. Having said that, expect the bike to also have modern enhancements like an all-LED lighting system, ABS with multiple modes, and a USB charging port.

Triumph has proved that an instrument cluster can look old-school while still being packed with modern data. Likewise, Yezdi could also equip the upcoming Roadking with an info-packed semi-digital instrument cluster, possibly with smartphone connectivity and turn-by-turn navigation. These additions should keep the geeks and discerning riders happy.

Ain’t no replacement for displacement:

Yezdi already has three bikes catering to three different kinds of riders in the 300-odd cc segment. Compounding this, Yezdi has also confirmed that the upcoming Roadking will have a bigger engine than the current lineup has. Now, Yezdi’s parent company Classic Legends also owns BSA, and the latter recently unveiled the new Gold Star 650 retro bike, armed with a 652cc single-cylinder liquid-cooled engine. It would be prudent for Yezdi to plonk this engine into the upcoming Roadking. This will not only justify the Roadking’s legendary brand recall, but will also make better use of the 650cc platform. In the Gold Star, this heart churns out 45.6PS and an impressive 55Nm, just 2PS less and 3Nm more than the parallel-twin engined Royal Enfield Interceptor 650. That said, the BSA is more of a premium, niche brand whereas the Yezdi is more accessible. So, in order to keep the costs in check, Yezdi might downsize the engine a bit.

As expected from a typical retro roadster, the Yezdi Roadking will in all probability be equipped with a telescopic front fork, twin rear shock absorbers, spoke wheels with tubed tyres at both ends. Braking could include discs at both ends, but as mentioned before, with multi-mode ABS. Expect the seat height to be accessible enough for Indian riders, perhaps in the same ballpark as the Interceptor 650’s 800mm.

When could we see the bike? What about the price?

Yezdi officials did mention that the Roadking will make a comeback soon, depending on the ongoing pandemic situation. The bikemaker could launch the Roadking in early 2023, likely at around Rs 3 lakh (ex-showroom). If Yezdi manages to nail the pricing, then it will have a great chance of stealing the thunder away from the Royal Enfield Interceptor 650.