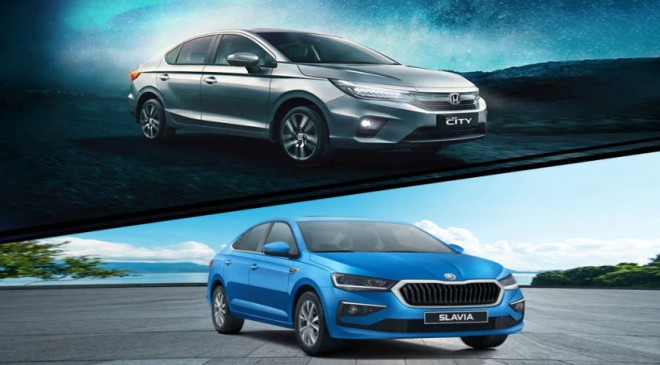 Both cars get all the bases covered. But the Honda commands a premium. Does it make a case for itself?

The Skoda Slavia, which has recently been launched at Rs 10.69 lakh, aims to usurp the current segment leader, the Honda City. But to ensure better appeal, Skoda has priced the sedan around Rs 50,000 lower than an entry-level City. The question we’ll be answering mainly in this report is whether the City makes a case for the additional moolah it’s associated with.

Outside, the Slavia gets the basic features like halogen headlights, 15-inch steel wheels, and incandescent bulbs for the tail lamps, par for the course on an entry-level trim.

But if you want your sedan to ooze an air of premiumness, the Honda City V gets projector halogen headlights, 15-inch alloys, and LED tail lamps. It also gets front fog lamps, a feature absent on the Skoda Slavia Active.

The Skoda Slavia Active, once again, gets the basics covered with a 7-inch touchscreen infotainment system, Android Auto and Apple CarPlay, a manual air-con, rear AC vents, analogue dials with a multi-info display, keyless entry, steering-mounted audio control, a 12v power socket, and electronically adjustable ORVMs. In our opinion, it’s decently loaded for a base trim.

Owners spending their time in the rear seat would also appreciate that the entry-level Honda City gets rear AC vents and an arm rest, both of which are omitted in the Slavia’s base trim. Surprisingly, the Slavia’s platform sibling, the Kushaq, gets both these features.

The Honda City gets the following extra additions: two more airbags (for a total of four), hill hold assist, and a tyre pressure monitoring system.

Note: Since the Slavia is a petrol-only offering, we have compared it with the City’s petrol variants only.

On paper, the Honda is 6PS more powerful than the Skoda, while the Slavia has the better torque figures. But the Skoda’s engine, despite being small, is turbocharged, and that means these power figures are at its peak lower down the rev range. Does that help in better driveability? We’ll be answering that soon in our comparison test.

But back to our on-paper comparison. The Slavia Active is offered only with a 6-speed manual and if you need an automatic, you have to stretch to the second Ambition trim. On the other hand, Honda offers the base-spec City with both manual and automatic transmissions.

In terms of fuel efficiency, the Slavia boasts the better claimed numbers, but bear in mind that turbo-petrols are sensitive to driving style. And these numbers can tumble down if you’re hard with your right foot.

The Honda also gets the choice of a 1.5-litre diesel, while the Slavia gets the option of a more powerful 150PS 1.5-litre TSI engine. Once again, the 1.5 TSI is limited to the top-spec Style.

The Honda City V commands a premium of Rs 54,000 over the base-spec Skoda Slavia. As a package, the entry-level Skoda gets all bases covered with all the necessary features and fun-to-drive 1-litre TSI engine. But if you have the extra moolah, we suggest you splurge it out for the City, as it justifies the premium with its posh appeal on the exterior, additional creature comforts and safety features.

The entry-level Honda also gets the choice of a CVT and diesel engine right from the base trim, which further solidifies the City’s case. But can the Skoda win back the fight when its top-spec trim is compared? Our answer will be out soon, so stay tuned.