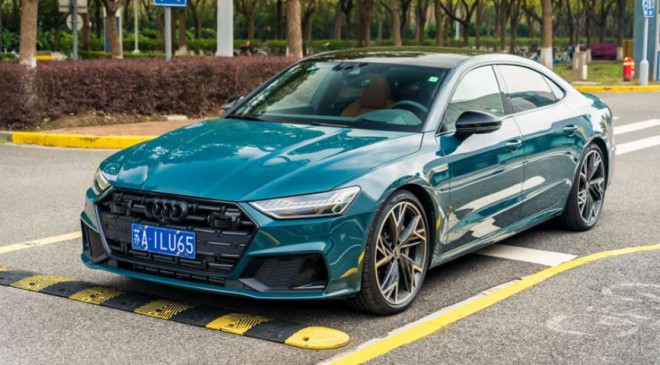 It’s longer than the A6 and has a longer wheelbase than the standard A8.

The second-generation Audi A7 was unveiled in 2017 and has been on sale globally since the first half of 2018. It is based on Volkswagen’s MLB Evo platform and shares many components with the A6 and A8. In fact, the A7 is a liftback-shaped, more luxurious alternative to the A6, at least in Europe and the United States. If you are in China, though, there’s a new version of the BMW 8 Series Gran Coupe competitor and it is… a sedan.

The Audi A7L made its official debut in April last year as a stretched A7 with a traditional three-box shape. With the A7 basically being a liftback version of the A6 sedan, this means the A7L is a sedan based on a liftback based on a sedan. Yes, it may sound very weird at a glance, but the truth is the long-wheelbase A7 looks very good as a new video from Wheelsboy车轮哥 shows. Below is an exclusive gallery courtesy of our Chinese friends.

The interior of the A7L is not much different from the A7 we know in the US and Europe, though the extended wheelbase has a positive effect on the rear passenger area. An important thing the host of the channel points out is that the vehicle doesn’t come with rich standard equipment as most of the cool gadgets are an extra option. Some of the goodies you have to pay extra for in China include the wireless phone charger, adaptive cruise control, cooled and massaging seats, and others.

From China With Love:

The A7L is available in China with a selection of 2.0- and 3.0-liter turbocharged gas engines with different outputs. The most powerful variant, the one from the video, has a 3.0 TFSI with 335 horsepower (250 kilowatts), mated to a seven-speed dual-clutch automatic transmission. The 0-62 miles per hour (0-100 kilometers per hour) acceleration takes just 5.6 seconds. The A7L is produced by the SAIC-Audi joint venture and is sold only in China.