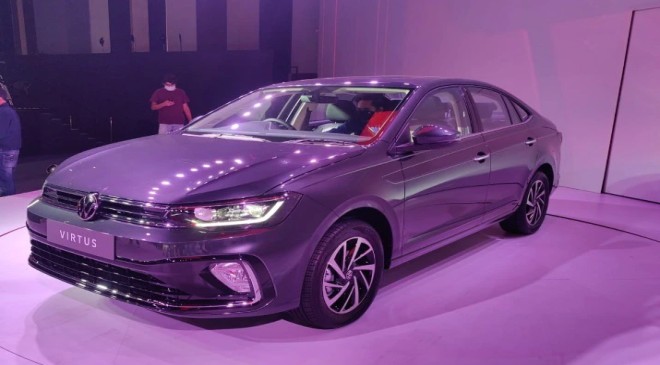 Volkswagen recently took the wraps off the Virtus sedan in India. It’s the second VW model to be based on the MQB-A0-IN platform, and completes Volkswagen Group’s India 2.0 strategy of restructuring operations and launching four made-in-India vehicles (two apiece from Skoda and VW). Here’s everything about the VW Vento successor in 10 images:

You’ll immediately notice from the front that the styling is largely identical with the sixth-gen Polo sold overseas. Highlights include a sleek grille with sharp LED headlights, gloss black finish for the bumper and a sleek splash of chrome below it. Essentially it’s the new Polo in sedan form.

Looking at the sides, you’d be confused whether it is a Virtus or the Skoda Slavia as they’re both based on the same platform. They measure 4561mm long, 1752mm wide, 1507mm tall; with a 2651mm wheelbase.

The only major difference between the Virtus and Slavia at the side profile is a swanky set of 16-inch alloy wheels.

At the rear, you’re treated to split LED tail lamps and a splash of chrome on the rear bumper. The bumpers themselves are nicely sculpted and add to the Virtus’s appeal. There’ll be six body shades on offer.

There’s also a sportier GT trim that adds blacked-out alloy wheels, a small rear spoiler, black elements on the ORVMs, and ‘GT’ badging to the Virtus.

Under the hood, it gets the option of either a 115PS 1-litre unit or 150PS 1.5-litre TSI petrol engine, paired to a 6-speed manual as standard. Automatic options include a 6-speed torque converter for the 1-litre TSI engine, and a 7-speed DSG for the 1.5-litre TSI.

Bookings for the VW Virtus are open, with a launch expected in May. Prices are expected to start from Rs 10.5 lakh(ex-showroom, India). Rivals will include the Skoda Slavia, Honda City, Hyundai Verna, and Maruti Suzuki Ciaz.