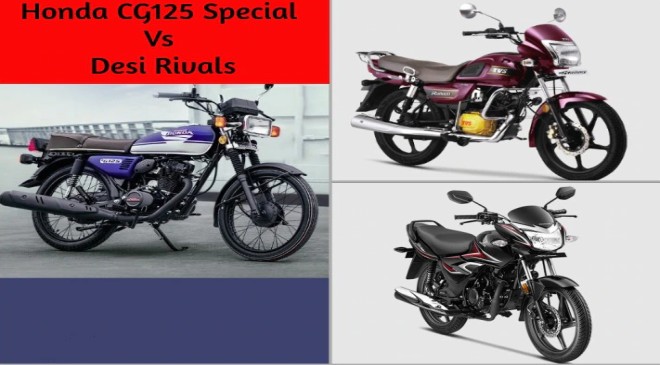 We pit Honda’s newest retro bike against its desi competitors, the TVS Radeon and the Honda Shine, to see how it performs on paper

Honda’s Chinese affiliate company Wuyang Honda recently launched the gorgeously retro CG125 Special edition in the country. It looks like the spiritual successor to the Hero Honda CD100. We pit the new entrant against its desi rivals, the TVS Radeon and the Honda Shine, to see which one fares better on paper.

The Honda CG125 Special does not make as much power and torque as the Honda Shine, and moreover, it’s rather peaky, with the peak output figures arriving 500rpm later than the Shine, meaning you’ll have to work the engine to get the most out of it. The TVS Radeon has the obvious displacement disadvantage when it comes to the output figures. However, its peak torque arrives much early down the rev range, which should theoretically make it a sprightly performer in the city.

Since the trio are commuter motorcycles, they share a similar suspension setup to ensure a comfortable ride quality. The optional disc brakes in the Radeon and Shine should offer much better stopping power than the drum-brake equipped ones.

Staying true to its retro genes, the Honda CG125 makes do with spoke wheels and tubed tyres. While spoke wheels can handle bad roads better, the tubed tyres will not offer as much puncture protection as the tubeless ones on the TVS Radeon and Honda Shine.

Coming to the features, the Honda Shine is the most feature-packed one among the trio thanks to the inclusion of silent starter, engine cut-off function, and engine kill switch. The TVS Radeon isn’t too far off when it comes to features as it gets an optional USB charging port in the headlamp cowl, and Eco and Power indicators that show how frugal/ aggressive the user’s riding style is. The Honda CG125 Special is the only bike in this comparison to have a tachometer. Its instrument cluster also looks a lot more old school compared to the Radeon and the Shine.

The Honda CG125 Special will not be launched in India, but fret not, as the Japanese bikemaker is working on an affordable commuter for India. We wish the upcoming Honda bike looks as tastefully retro as this one. Those who are not willing to wait for it can go for the TVS Radeon as it offers a great balance of peppy performance and frugality. That said, for those who are in the market for a no-nonsense, refined 125cc commuter bike, the Honda Shine is the best bet. In fact, the Shine has been by far the best selling 125cc bike for several years now.