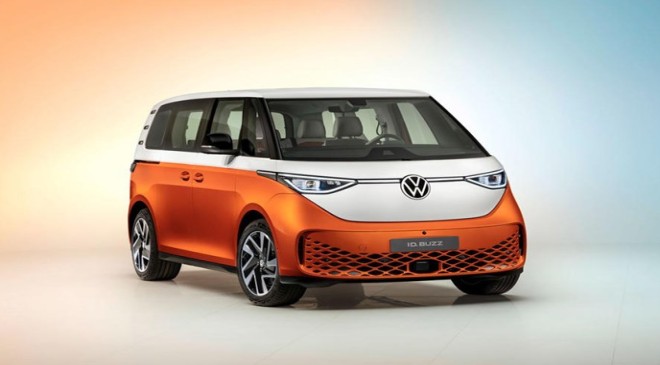 The retro-styled MPV gets a futuristic EV powertrain and a cargo variant.

Volkswagen has finally taken the covers off the production-spec VW ID.Buzz EV MPV, after the retro-futuristic EV reworking of the original Microbus was shown as a concept at the 2017 Detroit motor show.

Produced in the same commercial vehicle factory as the existing Volkswagen Multivan in Hannover, Germany, the latest addition to the all-electric Volkswagen ID line-up will be sold in passenger and commercial vehicle guises – the latter known as the ID.Buzz Cargo – with both models going on sale this year in a phased manner overseas.

Each variant will initially be available in single-motor, rear-wheel-drive guise, with power coming from the same rear-mounted synchronous electric motor – similar to those used by other recently introduced ID models with 201hp. More powerful variants with dual-motors and four-wheel-drive are set to be added to the line-up in 2023, with an ID.Buzz California camper van due to arrive in 2024.

Alongside the initial five-seat standard-wheelbase model, Volkswagen also plans to introduce a seven-seat long-wheelbase variant in 2023. Both feature conventionally hinged front doors and sliding doors (optionally electrically powered) on either side at the rear, along with a large vertical tailgate that opens at bumper level. The ID.Buzz Cargo offers the choice of one or two sliding doors with either a single upward-hinging tailgate or windowless wing doors that open out on exposed steel hinges on either sides.

Details such as the LED headlights, which come with optional IQ Light functionality with adaptive dimming of full beam, and full-width LED tail-lights have also been reworked, giving them a more technical appearance. Wheels range from 19 inch to 20 inch. Smaller than the original concept, the standard-wheelbase ID.Buzz is 4,712mm long, 1,980mm wide and 1,938mm tall. A 2,988mm wheelbase is the longest yet for a car based on Volkswagen’s MEB platform, which also underpins the Volkswagen ID.3, ID.4, ID.5 and a Chinese-market ID.6.

Inside, there is an ergonomically sound driving position in a uniquely styled cabin. The front seats are set 261mm higher than in the ID.4, promoting enhanced all-round visibility. Armrests are also included in the higher spec Pro variant for a true captain’s chair-like feel. The high-mounted, minimalist dashboard is uniquely designed and houses both a 5.3-inch digital instrument display and standard 10-inch infotainment touchscreen – the latter also being available as in 12 inches.

While other ID models use a rocker-style controller mounted high on the end of the instrument display for gear selection, the ID.Buzz receives a lever mounted on the steering column. It is also used to control the primary drive modes: D (Drive) and B (Battery). To help break up the large surfaces, Volkswagen offers a range of different colour schemes, including a two-tone treatment. There is also optional ambient lighting to brighten various elements.

Storage space has also been a priority in the cabin, with a compartment that hinges down from the base of the dashboard to reveal two large drink holders as well as a pod-like centre console, housing both a bottle opener and ice scraper – called the ‘Buzz Box’ – between the front seats and door trims.

Volkswagen also says it will offer its latest electric model with up to eight USB ports and an optional inductive smartphone charging pad.

In line with other ID models, it also gets OTA (over-the-air) software update functionality via an embedded SIM card, which allows Volkswagen to update various functions, as they are developed, without the need for the customer to bring the ID.Buzz to a workshop. In its most sophisticated specification, the new model incorporates over 30 different driver assistance systems, including Car2X communication, local hazard warnings and the latest incarnation of Volkswagen’s Travel Assist with an automated lane-change function at speeds of up to 90kph.

VW ID.Buzz MPV: can you haul?

The rear seat folds in a 60:40 configuration, but cannot be removed to extend luggage capacity – which is put at a nominal 1,121 litres underneath the cargo blind in the standard-wheelbase model, and extends up to 2,205 litres with the rear backrests folded. The cargo floor is not completely flat, but Volkswagen says it will offer the ID.Buzz with an optional raised floor. This will allow customers to turn the rear into a bed.

The cargo area of the commercial vehicle version boasts an overall volume of 3.9 cubic metres. Maximum load length, height and width are put at 2,200mm, 1,250mm and 1,700mm, respectively. This gives it the ability to accommodate two Euro pallets end on end. A partition (optional with a window) divides the cabin and cargo area. There are also fastening rails and up to six lashing eyes to keep goods secure.

The initial ID Buzz model comes with a 77kWh battery as standard, concealed wholly within the floor structure to provide what Volkswagen describes as a “a comparatively low centre of gravity for a van of such tall stature”.

Power comes by way of a synchronous electric motor mounted within the rear axle assembly developing 201hp. Drive is sent through a fixed-ratio gearbox to the rear wheels.

The battery can be charged at 11kW on household electricity, up to 22kW on an AC system and at up to 170kW on a DC system. A Plug & Charge function allows the ID.Buzz to communicate credit card data with the charger on suitable stations. It also supports bi-directional charging on a DC wall box, allowing you to use the ID.Buzz to directly power household appliances or top-up home batteries.

The official range has not yet been announced, although Volkswagen hints at a WLTP figure of around 400km. The carmaker is also planning other drivetrains, including a rear-wheel-drive, single-motor set-up with 168hp as well as a four-wheel-drive, dual-motor GTX performance version with 295hp.

The German brand is currently focusing on its India 2.0 products, which include the Taigun and the upcoming Virtus sedan. The company is evaluating a market launch for the ID.4 in the near future.