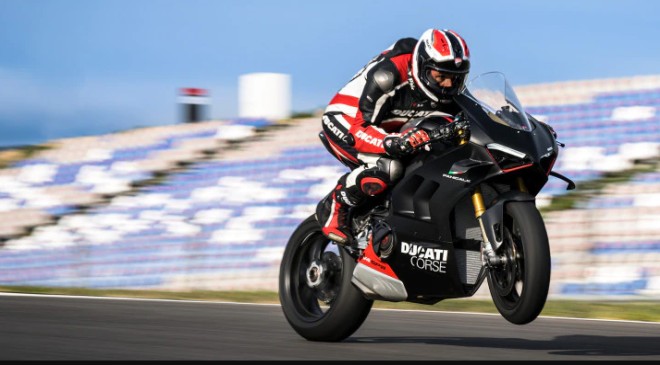 And it is coming to India this year

The 2022 World Ducati Premiere has finally come to conclusion with the unveiling of the new Panigale V4 SP2 – the top-spec member of the Panigale V4 family. Though the changes are not radical, the SP2 gets a few additional goodies over the improvements Ducati made on the 2022 Panigale V4.

So, the Ducati Panigale V4 SP2 benefits from the changes made to the chassis by changing the pivot point for the swingarm, offering better anti-squat movement under hard acceleration. It even features the new, smaller winglets. Furthermore, the fork travel has been increased, and softer springs have been used for an improved front-end feel. Lastly, the SP2 also features the new tank and seat design, claimed to improve control over the bike.

The 2022 Ducati Panigale V4 SP2 is powered by the same 1103cc Desmosedici Stradale V4 powerhouse, belting out 215PS at 13,000rpm and 123.6Nm, as seen on the other variants. However, the Italian marque gives you an option to push the numbers to an astounding 228PS and 131Nm by slapping on a specially-developed Akrapovic exhaust system; bringing down the weight to 168kg (dry).

Ducati will be shipping out the bikes to dealers March onwards, and just like the Panigale V4 SP, the Indian market will get the SP2 towards the end of this year. However, like the previous India-spec model, the new one too could come with magnesium wheels and Brembo Stylema caliper. That said, expect the bike to be priced around Rs 40 lakh (ex-showroom). And while the SP2’s debut isn’t happening anytime soon, the Panigale V2 Troy Bayliss Edition will be launched here on March 13.