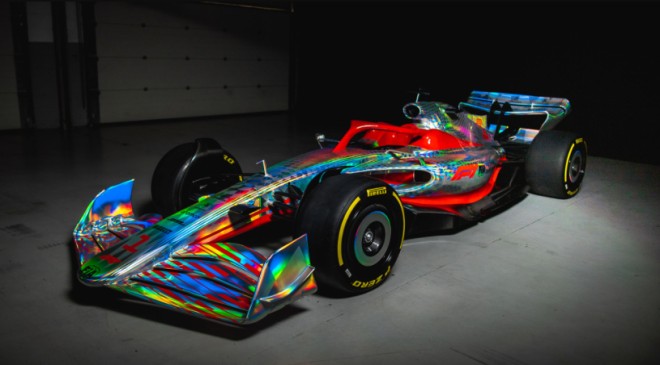 There had been whispers ever since Barcelona about the concept potentially exploiting some grey areas of the regulations, and it did not take long for such concerns to be voiced in Bahrain.

However, his team subsequently moved to deny he had spoken to any media – even though the respected journalist involved was clear he had talked to the team boss.

Whether Horner was speaking on and off the record is something only he knows, but in the comments he was reported to have said, he did suggest the Mercedes sidepod was against the ‘spirit’ of the regulations.

In F1, it’s incredibly difficult to measure the ‘spirit of the regulations’, because you can only quantify what’s written within them.

And, as such, the key factor in the rulebook about the Mercedes design and its incredibly slender sidepods, is the placement and fairing of the Side Impact Structures (SIS).

F1 cars must have two of these structures on each side of the car, all of which are a standardised design that the sport introduced in 2014. This was originally done as a cost cutting measure and also served to curtail some of the more exotic designs that were being produced at the time.

At the top of that list are the ‘U-pods’ seen on the McLaren in 2011 (above), with the team having to go to extreme measures to pass the stringent side impact tests required at the time.

There’s no longer a requirement for teams to pass a side impact test, owing to the spars being a known quantity, which just leaves room for the teams to design around the positional requirements imposed by the regulations.

In that respect, there have been changes for 2022. The upper SIS is now required to be placed at least 50mm higher than it was before, resulting in teams having to rethink their placement and how they impact flow into the sidepod cooling inlet.

Last year, all of the teams had converged on a variant of the solution that Ferrari first introduced in 2017, whereby the upper SIS was placed low and ahead of the inlet and ultimately produced a more aerodynamically favourable design.

Mercedes has taken this design principle and turned it upside down in many respects, placing the upper SIS in a higher position inside the allowable legality box and creating an aerodynamic fairing for it that acts as an airfoil for the very extreme sidepod packaging.

It’s also worth mentioning the cluster of vortex generators on the outer edge of its span (blue arrow), which also coincides with the redesign and repositioning of the mirror and its ancillary flow conditioning components.

Furthermore, there’s a new set of fins cropped up on the edge of the cockpit (green arrow), which we have seen other teams adopt already in order to help channel the airflow in a more desirable direction.

Decoupling the upper SIS from the sidepod bodywork has then allowed the team to think laterally about the size, shape and orientation of the internal components, the inlet plus the bodywork that shrink wraps tightly to them.

The sidepod itself is also pushed back from the SIS when viewed from the side, allowing the team some space to include some downwashing chassis canards ahead of the inlet (red arrows). This has been spun 90 degrees, with a tall, slender opening allowing it to minimise the width of the sidepod.

The design is reminiscent of the Ferrari 640 (above), which also featured a very tall, narrow inlet, especially if you compared it to many of the other designs on the grid at the time.

But, as the sidepod bodywork wraps rearward, there’s also a hint of the triangulation seen on the Brabham BT42. However, Mercedes has the benefit of being able to be more creative with its surface geometry, creating a sort of jelly-mould design, whereby the sidepod bodywork tapers into the floor.

Much like the Williams, which had already impressed us when it was revealed, the upper bodywork quickly tapers down and inwards too, although their passthrough inlet now seems to serve a similar purpose.

In a similar fashion to Williams, Mercedes may have moved some of its cooling to the car’s centreline, with the body widened significantly from the halo rearward, not only to accommodate the radiators and coolers packed in and around the power unit, but also to provide a defined route for the airflow to pass rearwards over the car.

This move to a more centreline dominant cooling package is nothing new though, as teams have been pushing in this direction for some time now. The Toro Rosso STR10 and McLaren MP4-30 were at the forefront of this in 2015 but, more recently, we’ve seen the likes of Alpine and Red Bull adopt similar saddle-like configurations.

To help keep things cool under the hood, especially in warmer climes, Mercedes also has decided to deploy two separate cooling gill panels, one at the front of the sidepods and one over the haunched section of the engine cover.

This allows it to run a minimal rear cooling outlet and decide upon a cooling gill arrangement based upon the circuit conditions at hand.

Whilst the sidepod and engine cover packaging takes front and centre in the discussion, there’s more for us to dig in to when it comes to the new Mercedes package, with the front wing and floor also revised.

The front wing upper flap has some subtle changes, with the trailing edge geometry altered in order to change the airflow’s passage across the front face of the tyre (red arrow).

Meanwhile, and perhaps more importantly, the team has altered the loading of the wing in the central section, with the dipped profiles used in Barcelona exchanged for more inclined variants.

In terms of the floor there are numerous changes, with not only a visible alteration made to the outermost edge strake’s orientation and shape, but the wave section in the front corner of the floor that it used during the first test has been discarded too.

There’s still some geometrical tricks being played with the floor edge here in order to entice the airflow. However, it is likely there’s still more to come over the course of the next few days as it has yet to deploy the floor edge wing that’s allowable in the new regulations.

At the rear of the floor, the team has also added a more robust metal stay in order to try and prevent the floor from flexing down towards the track as the load builds, and prevent the sort of porpoising issues that were prevalent for all teams in Barcelona.

This is becoming a common feature for the teams as they all try to combat the ill effects of the phenomenon and Ross Brawn, in an interview with Will Buxton, alluded to the FIA looking at the possibility of building the mandatory fitment of one into the regulations to help govern flexion.