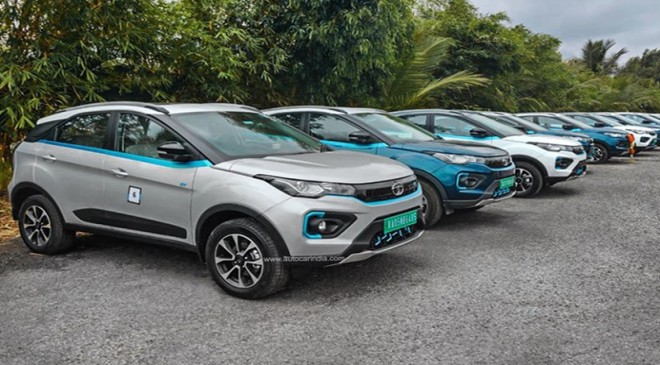 The sales of electric vehicles in India has been slowly but steadily on the rise. In February 2022, the passenger electric vehicle segment saw sales of 2,352 units in total, recording 58 percent growth compared to January and a whopping 297 percent growth as compared to last year, as per data by the Federation of Automobile Dealers Associations (FADA). And while the market is still in its infancy, Tata Motors continues with an unparalleled edge, accounting for 2,264 EV sales of the total 2,352 units, with either the Nexon EV or Tigor EV.

The reason for their success is the lack of rivals at that price point, giving them an unprecedented edge. The Nexon EV and Tigor EV are the only electric vehicles in a price range of Rs 10 lakh-20 lakh.

EV adoption has also been greatly boosted by several state incentives and policies, particularly in Maharashtra, where EV sales have gone up by 157 percent after the state EV policy came into effect. With several benefits, including an early bird scheme, the Tigor EV saw its price go down by as much as Rs 2.30 lakh. Meanwhile, select Nexon EV variants could be had with incentives of up to Rs 2.50 lakh.

That said, it’s important to note that Tata’s EV sales are perhaps still not at full potential as the automotive industry continues to be plagued by the semiconductor issue. Tata had previously revealed that its electric vehicles are seeing waiting periods of up to six months, thereby impacting monthly retail sales figures.

Tata’s lead in the market is more apparent when seen in context of the few other carmakers currently selling EVs in India. The MG ZS EV is the next most popular electric vehicle in the market, but it sold just 38 units in February 2022.

However, this is before the launch of the facelifted ZS EV that was just introduced earlier this week. That means MG’s EV sales for February 2022 only consisted of remaining stock of the pre-facelift ZS EV. Compared to January 2022, MG recorded a decline of 36 percent with 59 units sold, while yearly decline was 70 percent with 127 units sold in February 2021.

Meanwhile, the Mahindra eVerito sold 12 units last month, recording 20 percent yearly growth, although when compared to January 2022, growth was a negative 61 percent. Mahindra has been in the EV space longer than most, with models such as the E2O, although they are currently on backfoot with no new models, especially in comparison to Tata Motors.

That said, Mahindra will soon be previewing a completely new line-up of EVs with three new concepts under the ‘Born Electric Vision’ in July this year. These concepts will be precursors to upcoming models such as the XUV900 coupe and electrified version of XUV700.

Hyundai, meanwhile, retailed seven units of the Kona Electric in February, same as they did the previous month in January. However, compared to last year, sales were down by 59 percent. The Hyundai Kona Electric is also due a major facelift later this year in India.

BYD also recently started operations in India, selling 10 units of the e6, same as they did in January 2022. The BYD e6, however, is only available to fleet operators.

Although luxury carmakers have been much more aggressive in bringing new EVs to India than mass-market players, sales are obviously limited to just single digit numbers.

The Audi e-tron was the bestselling luxury EV last month with seven units old, while the Jaguar I-pace followed in second place with six units. The Mercedes-Benz EQC and the Porsche Taycan, meanwhile, sold four units each.

Growth outlook for EVs in India

Apart from Tata Motors, Mahindra and a few others, most carmakers have not yet defined a clear business plan for EVs in India. Tata Motors has ambitious plans to introduce as many as eight new EVs in India by 2025, while Mahindra too chalked out an elaborate EV business plan with its ‘Born Electric Vision’. Recently, MG also announced their plans for a raft of new EVs for India, the first of which will be a small two-door city car by early 2023, under a newly constituted EV division.

Meanwhile, Maruti’s first EV for India, to be developed along with Toyota, is still some time away, due in 2025. Other major mass-market players such as Hyundai and Kia will be adopting the CBU route first, with models such as the Hyundai Ioniq 5 and Kia EV6 slated to arrive in India this year. Even Volkswagen and Skoda are looking to bring the ID.4 and Enyaq iV as full imports, possibly by next year. All these models will, however, have a premium positioning in the market, with mass-market models only expected to arrive much later. Honda, too, is yet to define a specific EV business strategy for India.